In the past two decades, The Democratic Republic of the Congo (DRC) has been considered one of the most dangerous conflict areas in the world. Congo’s civil wars, which began in 1996, devastated the country. The fighting has abated in recent years, and there has been a concerted effort to secure, stabilize, and reopen parts of the country for tourism. One of the first success stories has been Virunga National Park, a UNESCO World Heritage Site and Africa’s oldest national park, located on the border of Uganda and Rwanda. Virunga is home to about a quarter of the world’s critically endangered mountain gorillas, and tourists are beginning to find their way back to the DRC to see these magnificent animals. 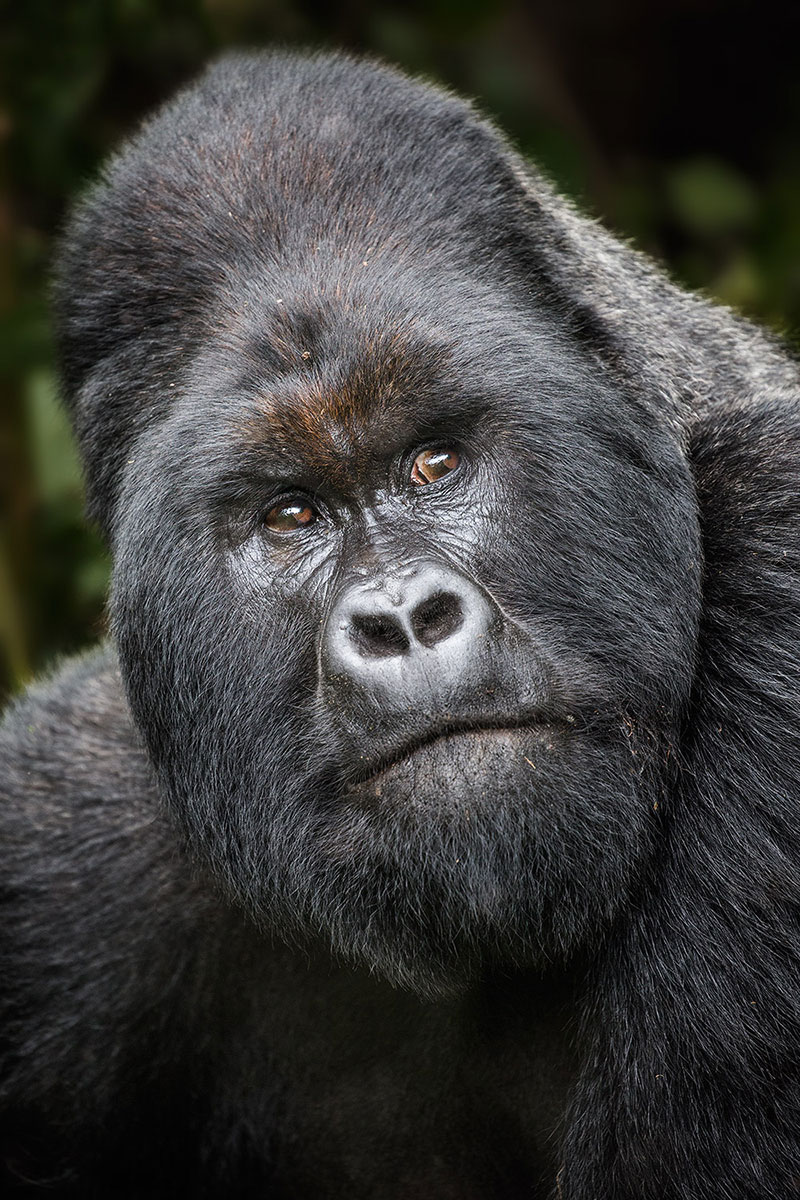 To reach Virunga, I flew into Kigali, Rwanda, meeting my driver at the airport. After a few hours’ drive I was at the border, where I crossed and met my Congo guide. In advance of my visit, I obtained a special tourist visa to enter the Congo for purposes of visiting Virunga National Park. From the border, it was only about a two-hour drive to Bukima Tented Camp, my base of operations for the next few days of gorilla trekking. 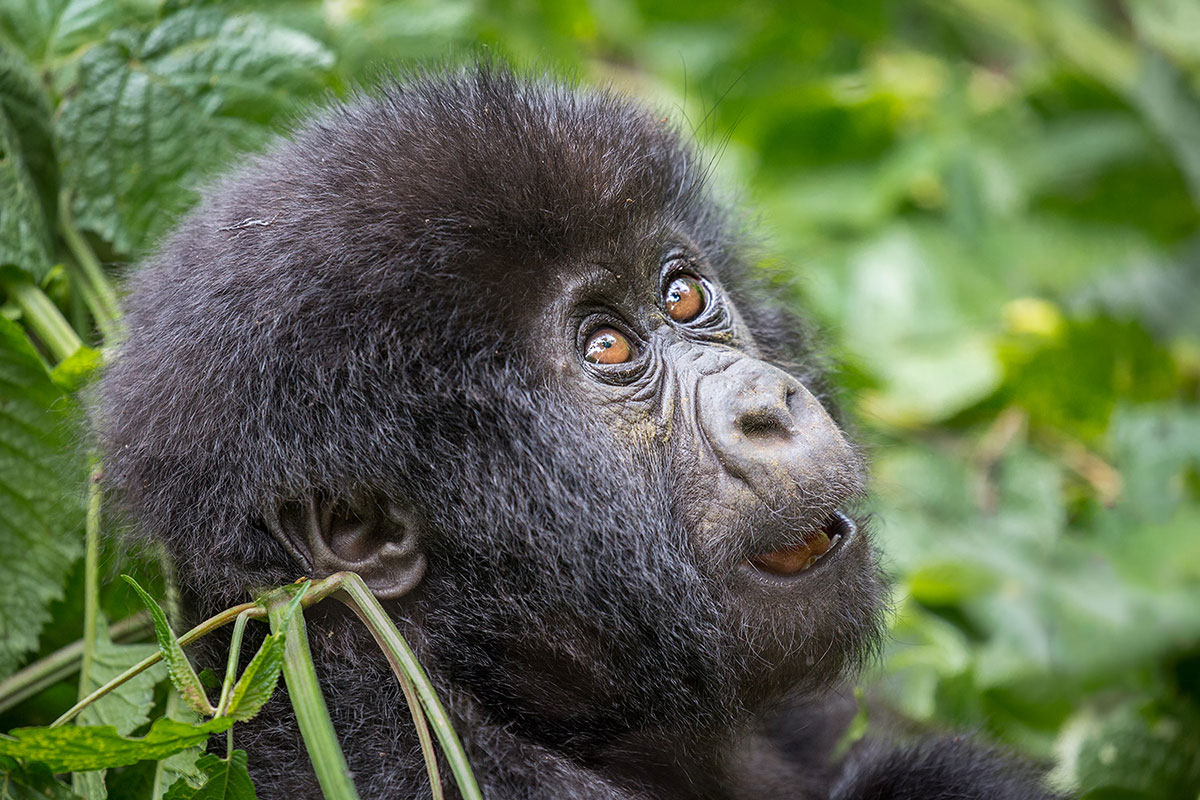 I’ve previously written about my experience trekking with gorillas in Volcanoes National Park, just across the border in Rwanda. Although both parks are within the Virunga Mountains with similar terrain, the gorilla trekking experiences are somewhat different. Rwanda’s gorilla trekking infrastructure is more sophisticated, while Congo’s is less developed and has fewer tourists. Also, the gorilla encounters in Rwanda tend to be in more open areas, whereas the jungle in the Congo seems denser. The photography in Rwanda is arguably easier as a result, but the dense forest of Virunga meant that I had a lot of close encounters with the gorillas—far closer than the official eight-meter distance rule for the park. 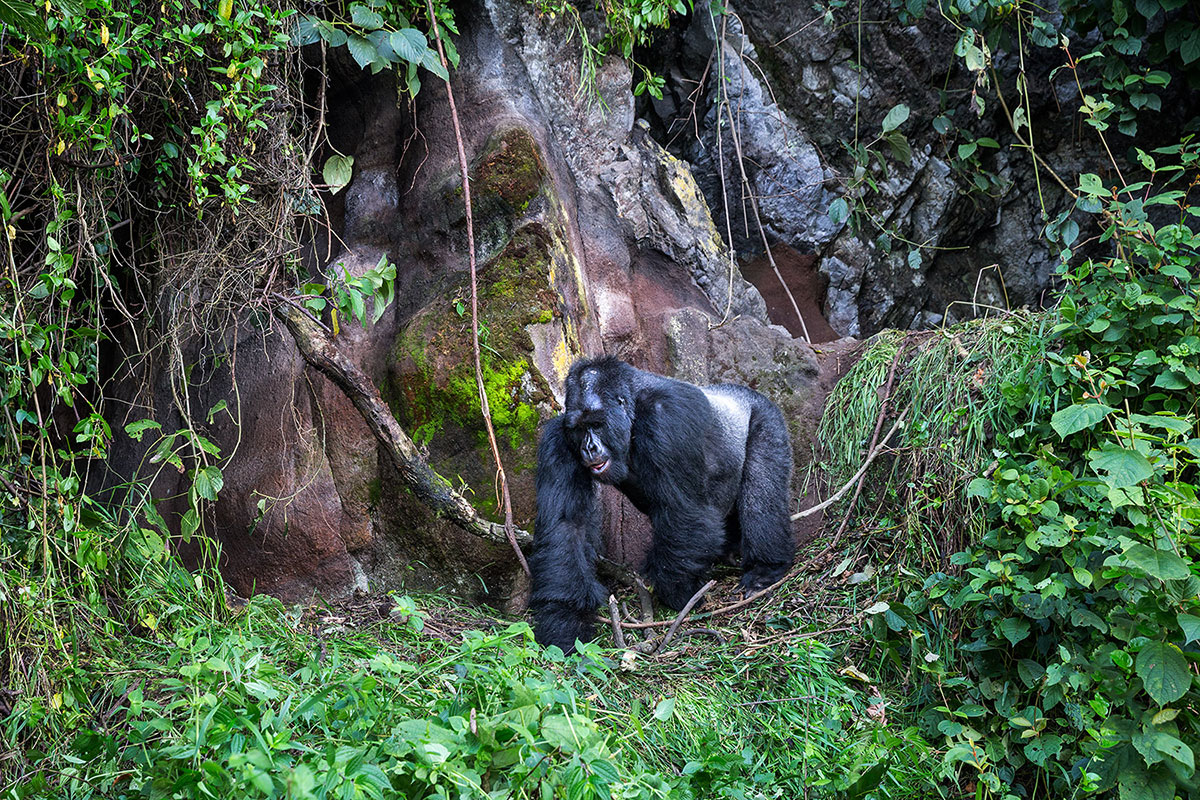 Because I was often close to the gorillas, I found myself taking a wider view in an effort to show them in the context of their environment, and to create compositions more interesting than simply zooming in for a tight portrait. For example, when a precocious infant gorilla climbed a tree above me, I zoomed out to 24mm. The swirling shape of the tree and the vines beneath it caught my eye, and I quickly decided to incorporate those elements into the overall composition. 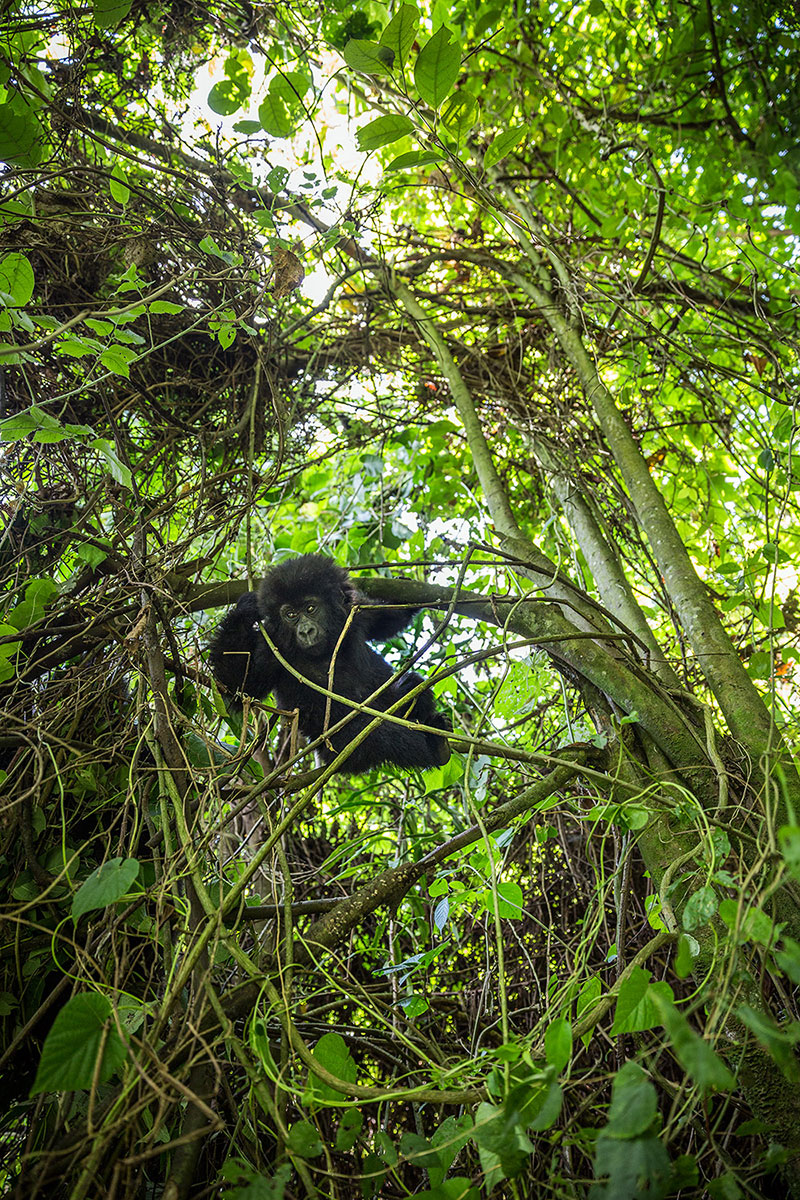 As always, I’m looking to tell a story, and to capture something of the elusive mystery of these animals. When I spotted this silverback lounging on the ground with his feet leaning against a tree, I zoomed out to include his surroundings. Unfortunately, the light wasn’t cooperating with me, as it was a bright sunny day, and the background was in the light while my subject was in deep shadow. Because of the extreme lighting conditions, I quickly shot three different exposures using exposure bracketing, and then I later merged the three exposures in Adobe Camera Raw’s Merge to HDR (this feature is also available in Lightroom). This effectively expanded the camera’s dynamic range, allowing me to tame the bright highlights in the background and reveal detail in the shadowed parts of the scene. 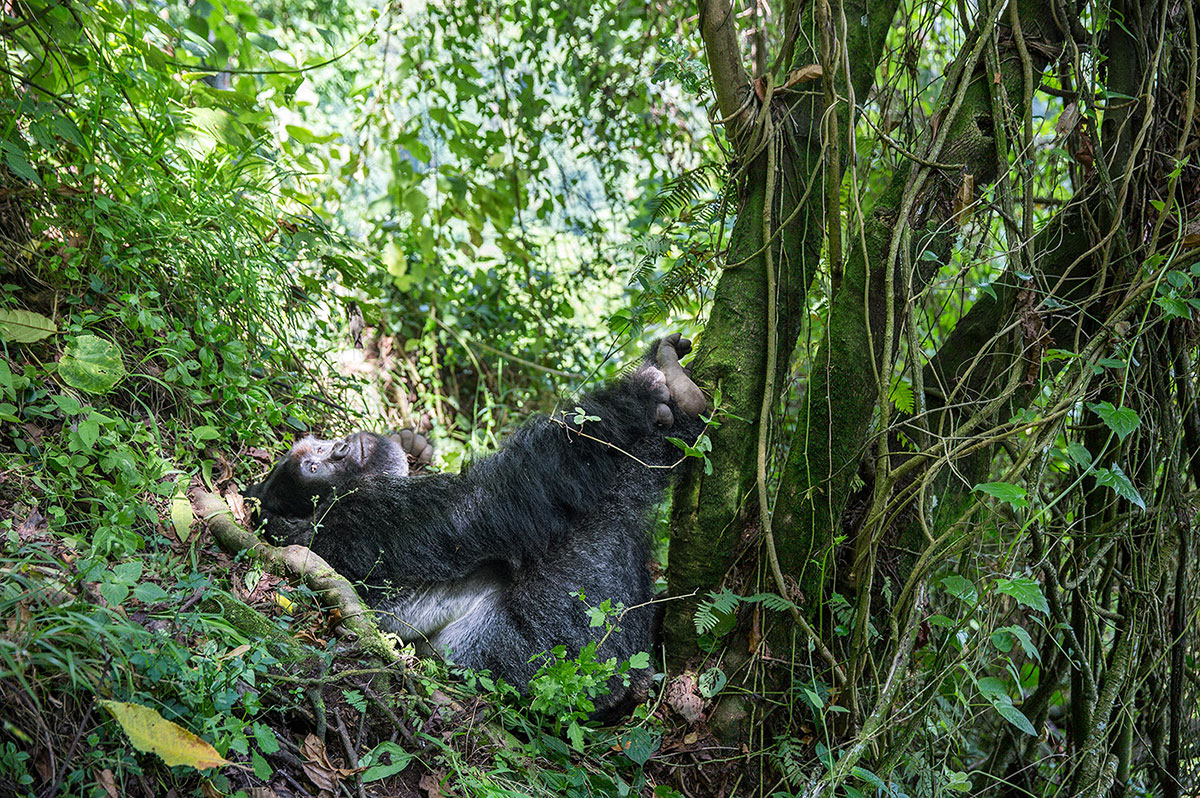 You can go online to learn more about conservation efforts to protect Virunga National Park here, and for mountain gorillas in general here. For my Congo adventure, I used Gorilla Trek Africa; they arranged my transfers, lodging, gorilla trekking permits, and basically everything else. 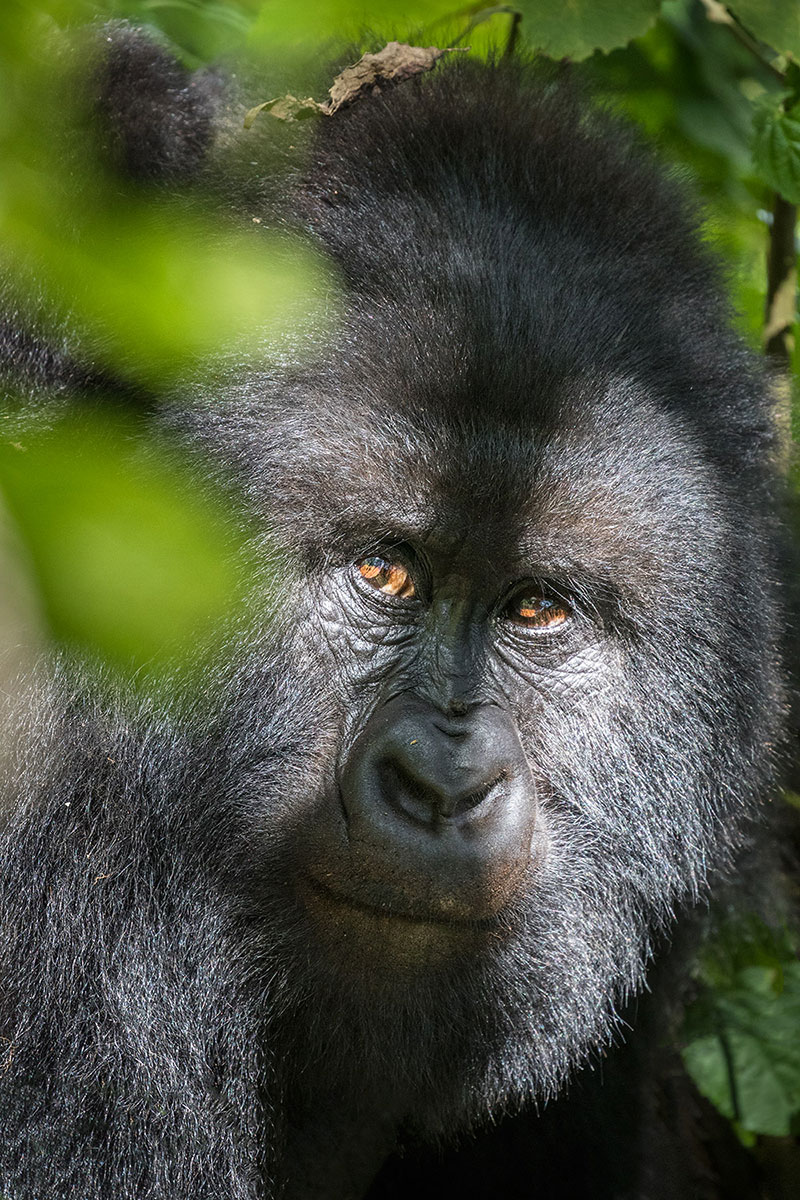