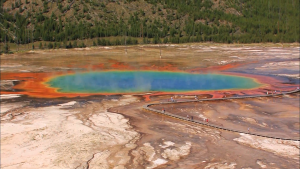 Including Yellowstone National Park, this video tour gives you a view of America like you haven’t seen before. See our country’s unrivaled vastness in beauty — from the picturesque beaches of the Virgin Islands and the untainted blue waters of Crater Lake, Oregon, to the sub-tropic Florida Everglades and the world’s largest cave, Mammoth Cave in Kentucky.

About the Producer: DENNIS BURKHART

Dennis has not only filmed every National Park, he is the first to film all 58 parks in HD. As a young man, he served as a National Parks Interpreter. As a producer and director for Questar, PBS, Discovery Channel, NBC and the Travel Channel, he has filmed locations and cultures around the globe.

Watch a preview of this DVD below: