Sign in to view full video or become a member now!
Duration: 15:21

Wildlife photography in the winter can produce breathtaking images of both wildlife and their surroundings. Photographers Doug Gardner and Jared Lloyd show you how to photograph these beauties while also safely traversing one of the harshest winter environments in the world.

If you’re tired of shooting wildlife in your own backyard, why not expand your horizons to more rustic surroundings, such as Yellowstone National Park? In this session, you’ll follow photographers Doug Gardner and Jared Lloyd as they show you how to prepare for a winter trek and deal with the harsh weather conditions while also keeping vigilant for the great photo ops you will encounter. Click here to some more wildlife photography techniques.

Doug points out that by being in the same space as the wildlife, you can gain a greater appreciation for their environment and what they have to do to survive in winter, illustrating the importance of being prepared yourself. Dressing properly for severe winter cold can save your life. It’s crucial to wear layers, which can be shed if you warm up. Waterproof gloves are also a must in snow, as frostbite is a risk that can happen in just a few minutes of exposed skin in severe cold.

During the photo shoot, the photographers encounter bison trudging through 4 or 5 feet of snow. The animals swing their massive heads back and forth to sweep away the snow so they can find food underneath. While this makes for a dramatic scene to watch, it also creates a scene where the animals’ heads are often buried in snow, so Doug and Jared must be hyper vigilant to be ready to quickly grab the shot as the head pops up.

As the photo shoot progresses, they are able to photograph a sleek bobcat they’d been tracking, take close-ups of a grouse, and get a peek at a gray wolf dining on some prey. They run across a beautiful elk walking in the river, with just enough time to get some photos before they start to lose the sun. As they prepare to head back to their vehicle, Doug uses the opportunity to explain how to use overexposure to compensate for the camera’s attempt to make the snow a neutral color.

MORE IN THIS COURSE:

Purchase video and add to your personal library with on-demand video access. 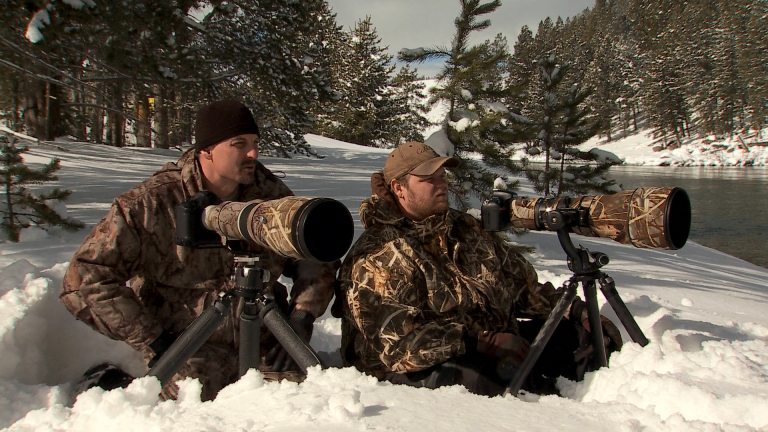 $10.98
Add to Cart
Winter Wildlife Photography TipsJoin Outdoor Photography Guide to continue watching for $8.00 per month / $82.00 per year or purchase this video for $10.98.