Possibly the most prominent symbol of Central America’s tropical forests, often seen on posters, puzzles, and greeting cards, is the red-eyed tree frog (Agalychnis callidryas). These small creatures are only about 5-7 centimeters long, and are very difficult to find in their natural habitat. Tree frogs are green, naturally camouflaged in tropical green forests, and are nocturnal. To find one, it is best to have a guide. I began my journey for tree frogs while exploring the tropical forest in Costa Rica while on assignment for a travel magazine story. 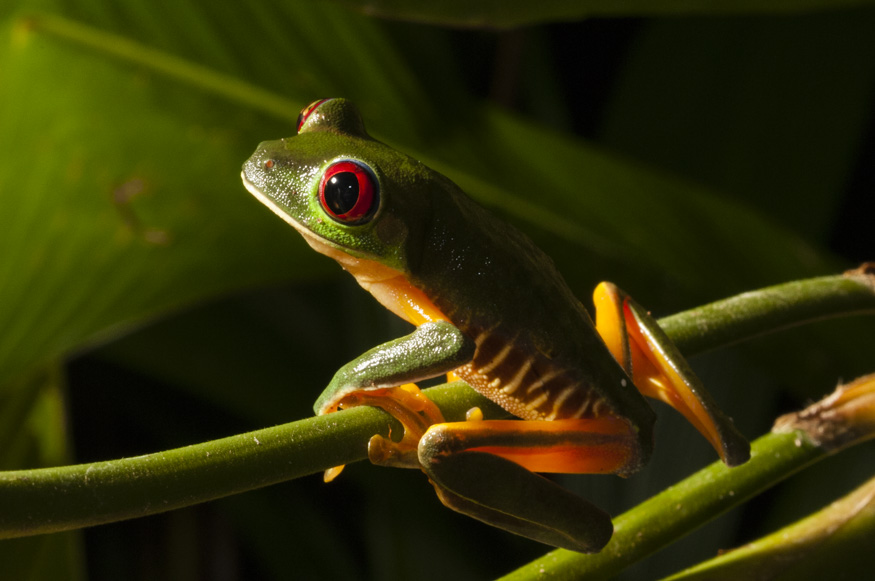 Everything had been planned in advance by contacting the authorities of the Manuel Antonio National Park to get the necessary permits. Andres Chavez, an experienced nature guide, was waiting for me after dinner at the park entrance, closed to the public during the night. We walked into the dense forest shining the path with torches, being careful where we walk to avoid crushing inadvertently the small inhabitants of this paradise. Not to mention, looking out for any snakes, which are numerous in this tropical forest. I would have loved to photograph one, but (un)fortunately they tend to avoid humans and to run away at the slightest vibration of the ground. 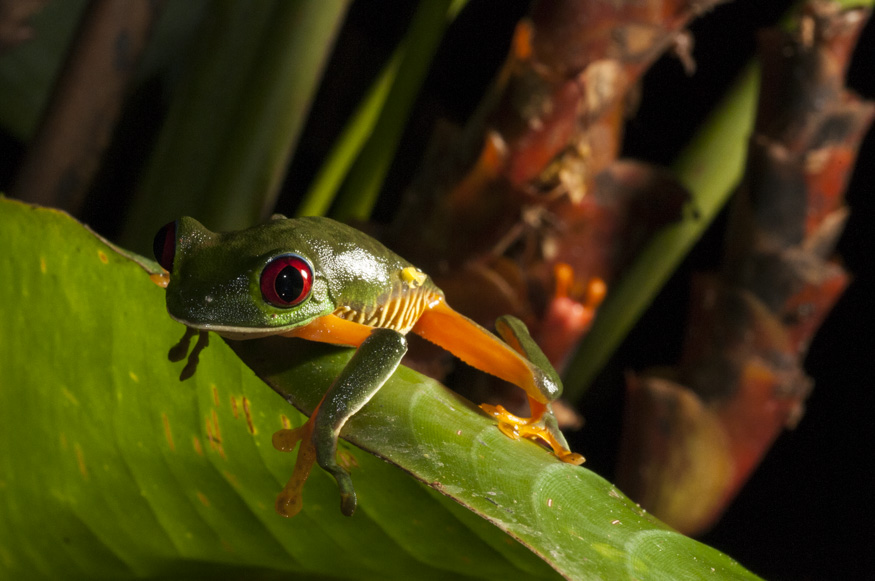 In this park, located on the Pacific coast of the country, the humidity is very high already in the daytime, and the night becomes unbearable. Walking with a tripod and a backpack full of gear is not very easy. Luckily, Andres finally found a place with a few frogs not far from the path. For each story I shoot, I have a list of the most important subjects that I must bring back to my photo editor, a sort of “storyboard” to follow. The red-eyed tree frog was one of them of course, so no there was no way I was coming back without this shot! 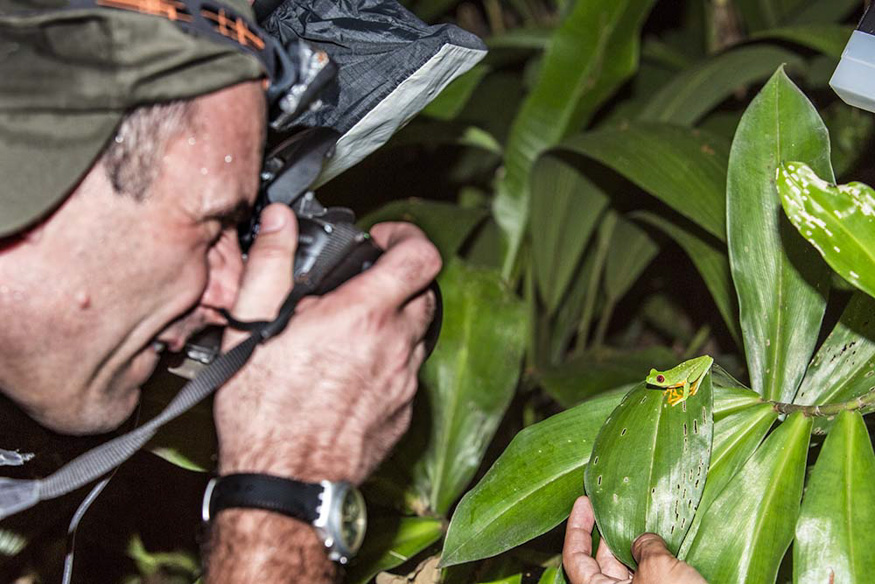 After a quick scan of the scene I decided to make the images using a Nikon 60mm Micro mounted on an APS-c body to take advantage of the magnification ratio. As a documentary photographer I try to get an image of the subject as it appears, I don’t remove elements from the image in post-processing and I rarely use special techniques. In order to have an acceptable depth of field I stopped down the aperture to f/32 and illuminated the scene with two flashes, one from the left at full power with a small bank to diffuse the light and one underexposed on the right with to fill the shadows. After a few shots the frog in different positions the frog disappeared from the viewfinder. It was on my lens! 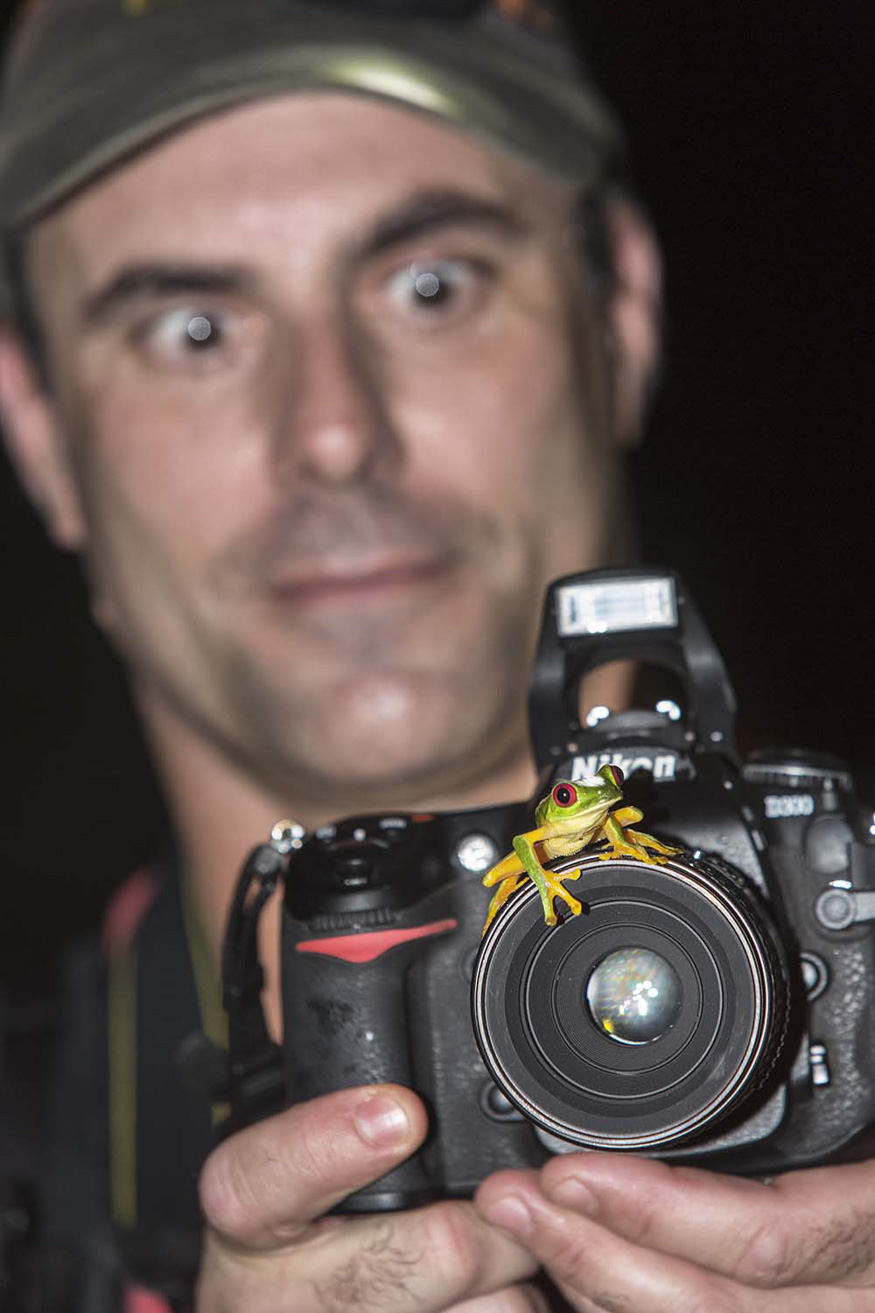 About the author: Award-winning photographer and journalist Sergio Pitamitz has French and Italian double citizenship. He is a National Geographic Creative contract photographer and covers nature, conservation, and wildlife stories. On assignments he has traveled to more than 80 countries in all seven continents, and he has received recognition in many international photography contests such as Nature’s Best, National Wildlife, Oasis, and Audubon. In 2016 he won the National Press Photography Association’s “Best of Photojournalism” award in the Environmental category. His photography is represented by National Geographic Creative and Getty Images. When he is not on assignment, Sergio leads photo tours in the Polar Regions as well as in Africa and other big cat habitats. Learn more about Sergio, and see more of his work at www.pitamitz.com.

One Response to “Behind the Shot: Too Close?”