Leading lines are vertical, horizontal, or diagonal lines that attract a viewer’s attention and lead the eye to critical areas in your image. Leading lines are an effective tool for landscape photographers looking to create depth in their photos, and to draw the viewer deeper into the scene.

For the image below, I used a leading line—the reflection of the sky above a flooded slot canyon—to encourage the viewer to explore the entire composition from bottom to top. 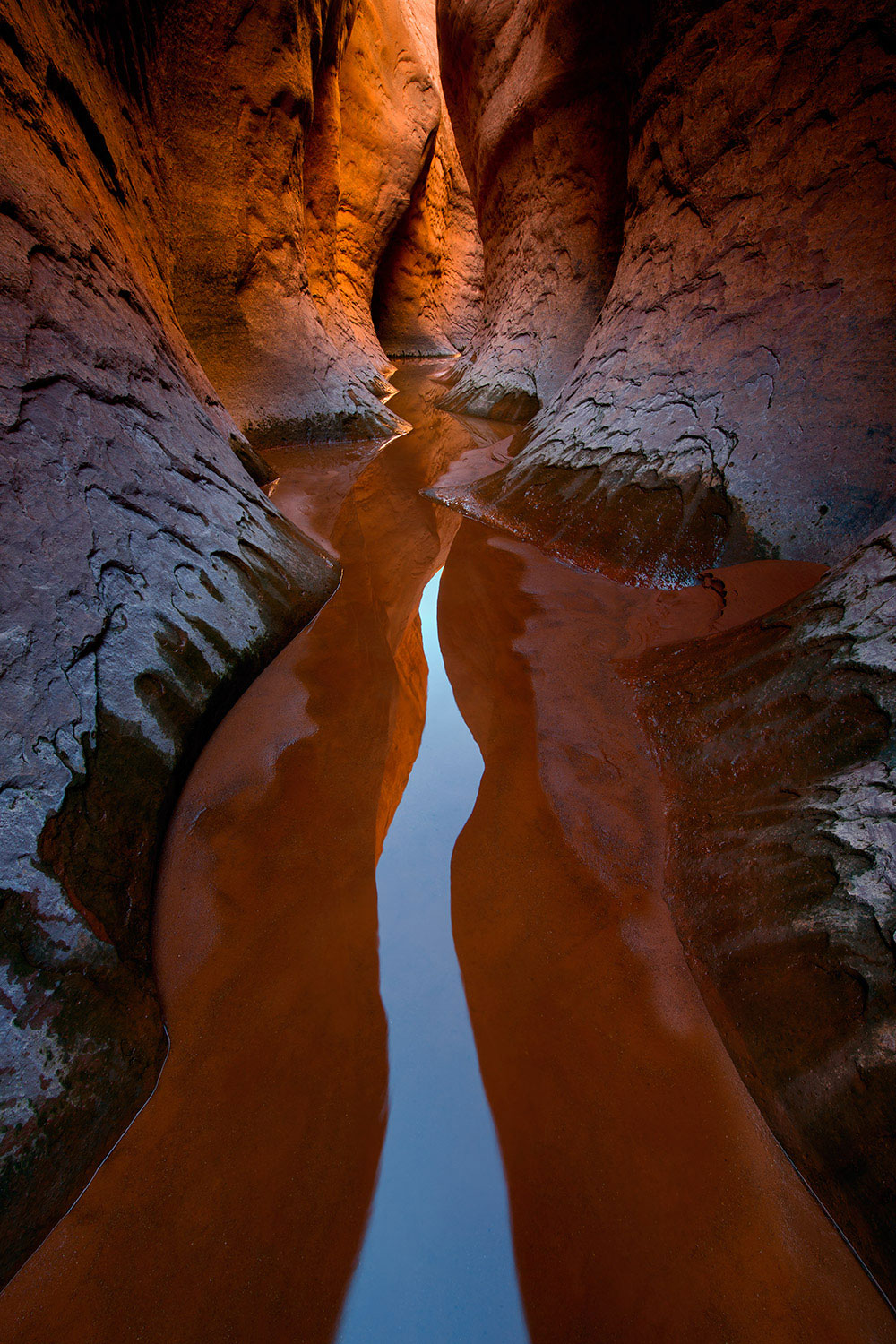 Quite simply, lines are visual elements of a scene that are more or less straight and that have significant length but relatively little width. An example might be tree trunks in a forest, such as with the image below. Technically, lines alone are nothing. As the famous painter Henri Matisse once said, “A line cannot exist alone; it always brings a companion along. Do remember that one line does nothing; it is only in relation to another that it creates a volume.”

For example, each tree trunk in the photo below isn’t really a line, but rather two lines that form the shape of the trunk and give it volume. For simplicity’s sake, however, I will refer to many objects that are really a collection of lines as simply a single line. 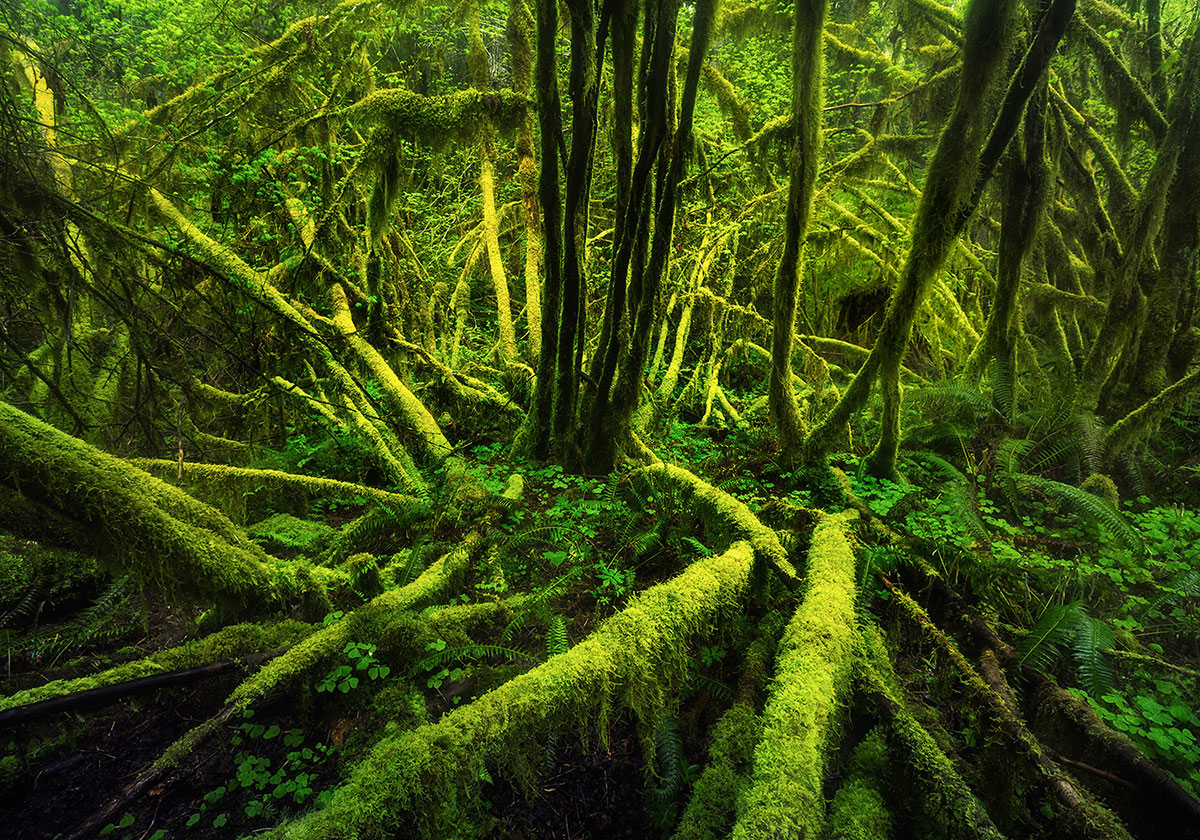 Use lines to lead the eye 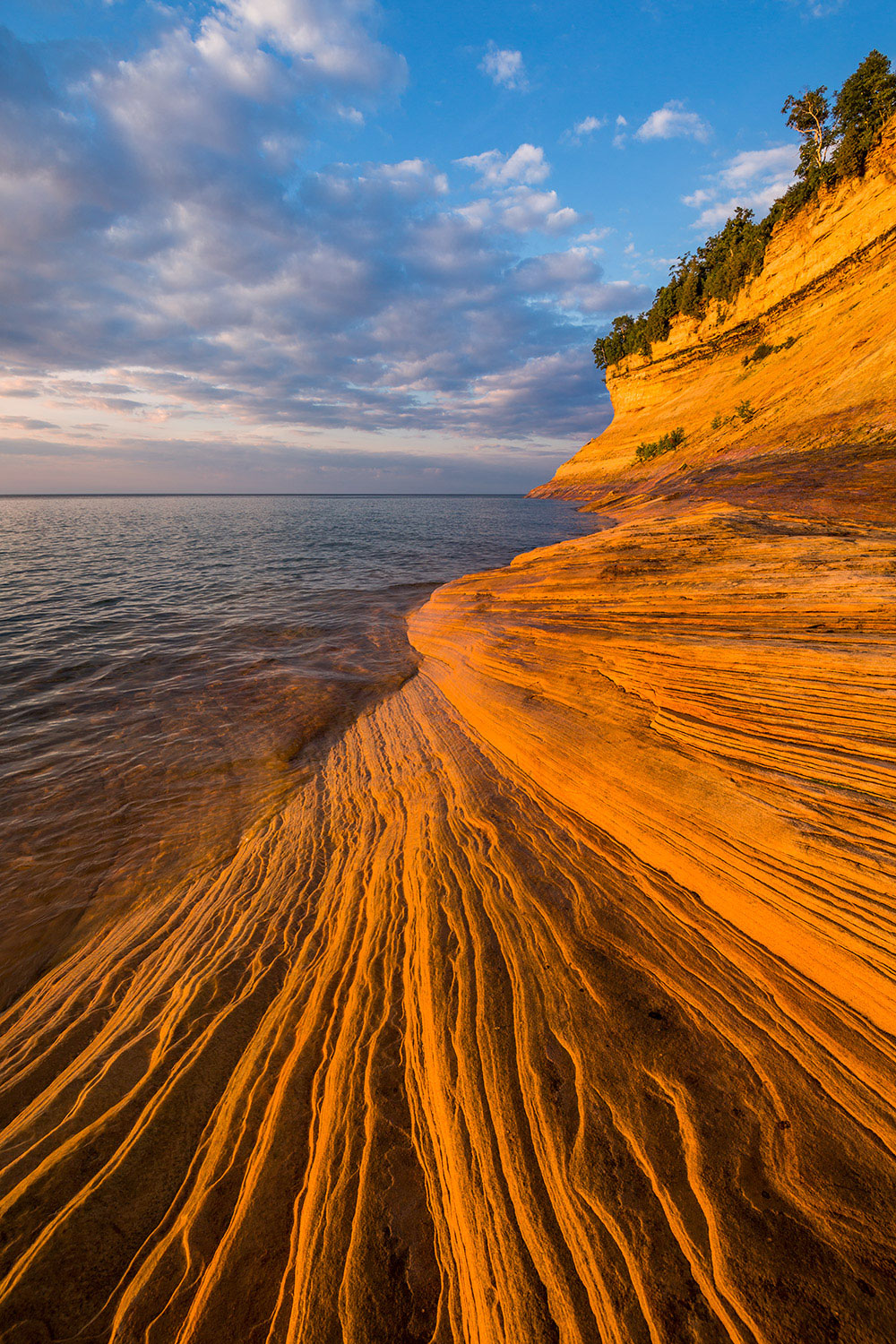 Diagonal and vertical lines often make for a more dynamic composition than horizontal ones, giving a sense of upward or downward motion as they lead the viewer’s eye. Horizontal lines, such as a distinct horizon line, can sometimes be problematic as they tend to visually divide a scene, and if placed improperly can interrupt visual flow and trap the eye. Lines often work best when starting at the bottom of the image frame, but you can also make effective compositions having the lines come from somewhere else. In the image below, lines formed by rippled sand effectively lead the viewer’s eye from the foreground in the bottom of the composition, to the background near the top. 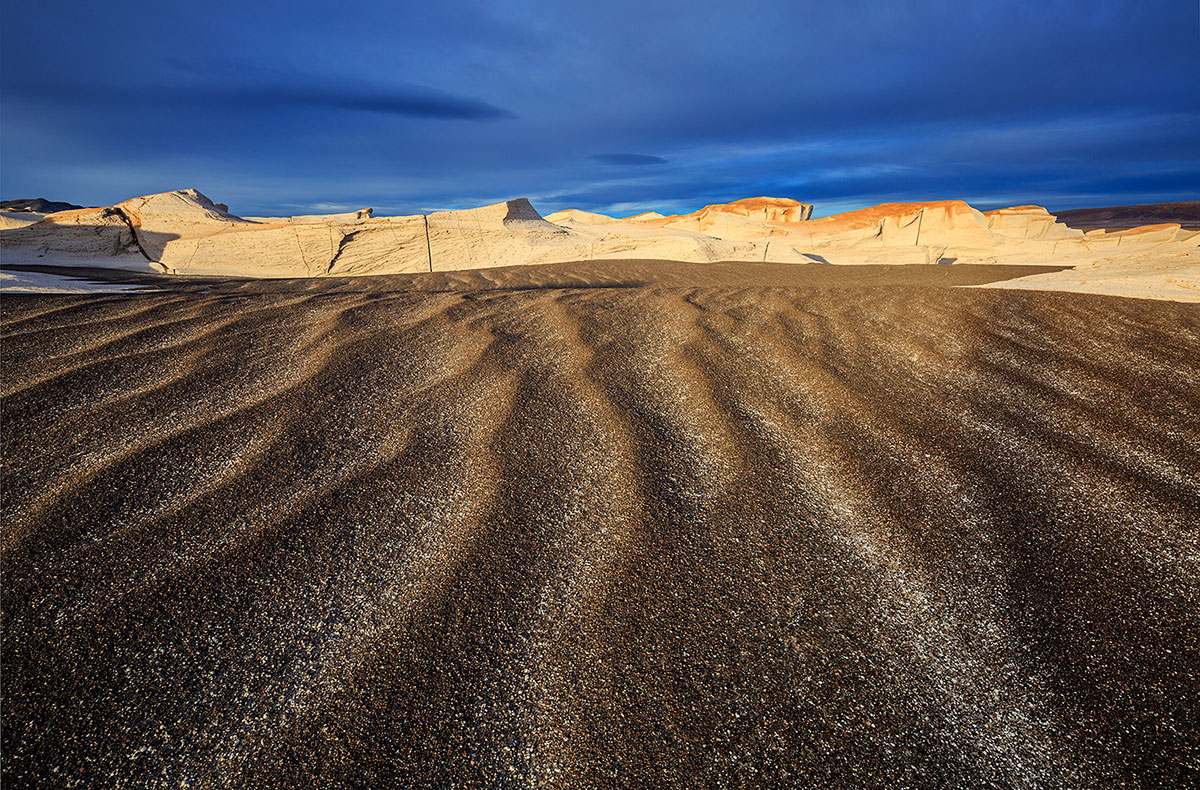 Use converging lines for compositional power

For greatest effect, multiple diagonal lines can help create a sense of depth in a photo by converging at a single point of interest. This is known as a vanishing point, which is the point in the distance at which objects become too small to see. This concept is easily illustrated by railroad tracks: even though they are parallel, when you look down a set of tracks, they seem to steadily converge to a point at the horizon. This point is the vanishing point. When used in landscape composition, a vanishing point creates an important perspective cue and can be very effectively used to create depth in a photograph. For example, with the image below, the ripples in the sand appear to converge in the distance, even though they are parallel and don’t actually converge. 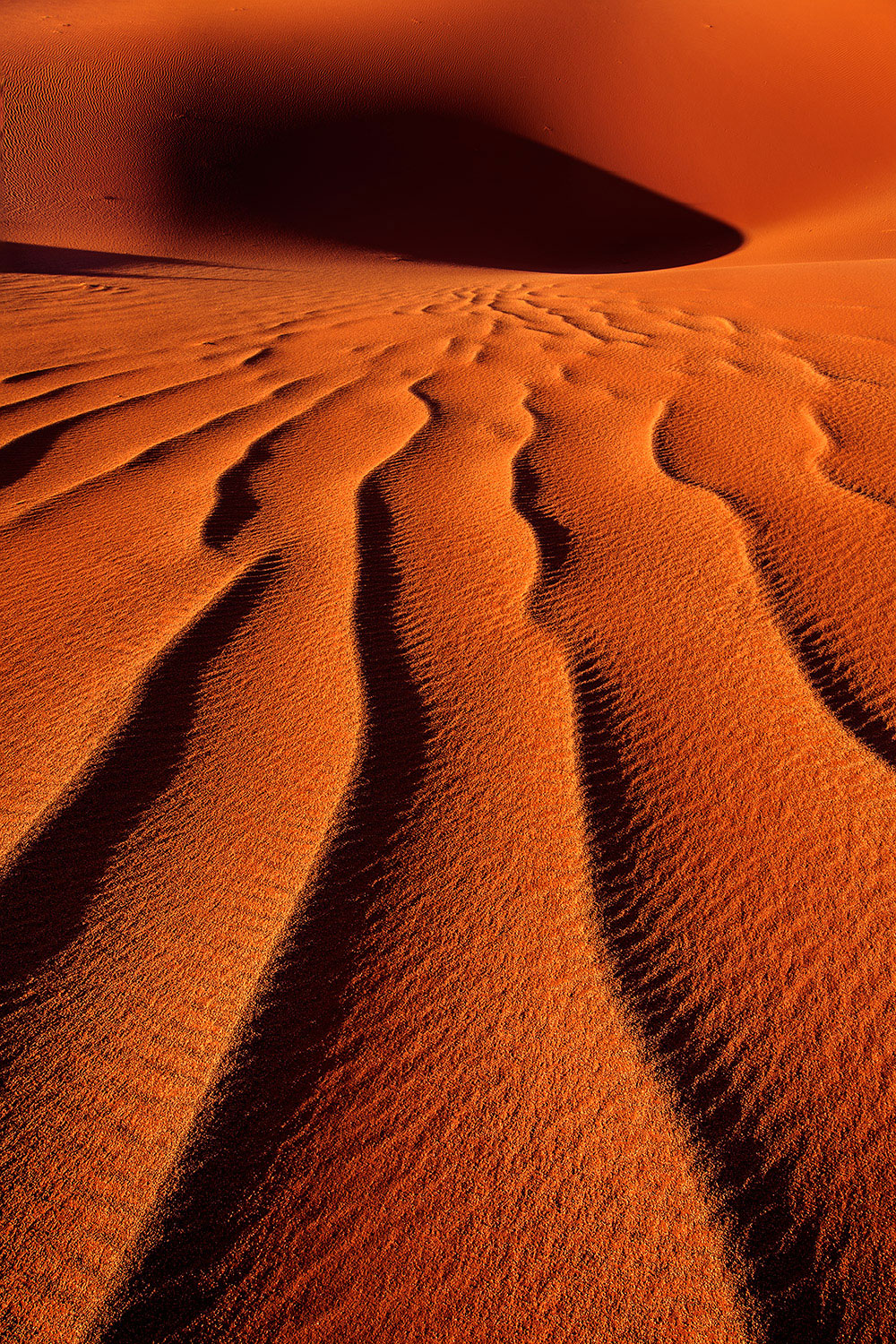 This realization—that objects receding in size with distance (especially parallel lines) appear to converge on a single point—revolutionized perspective in art during the Renaissance. Painters took full advantage of the use of vanishing point, using it to create depth in their compositions and to create a realism of perspective that had not been seen before in art. It didn’t take painters long, however, to figure out that the use of vanishing point didn’t just create depth—it also riveted the eye, compelling it to travel headlong deep into the image. The human eye is naturally inclined to follow a line to its conclusion; this is what makes vanishing point so powerful, as a vanishing point is where two or more lines in an image terminate. For the image below, I used a long exposure to capture streaking diagonal lines resulting from foam flowing toward me in the moving water. The effect creates a vanishing point powerfully leading the viewer from foreground to background. 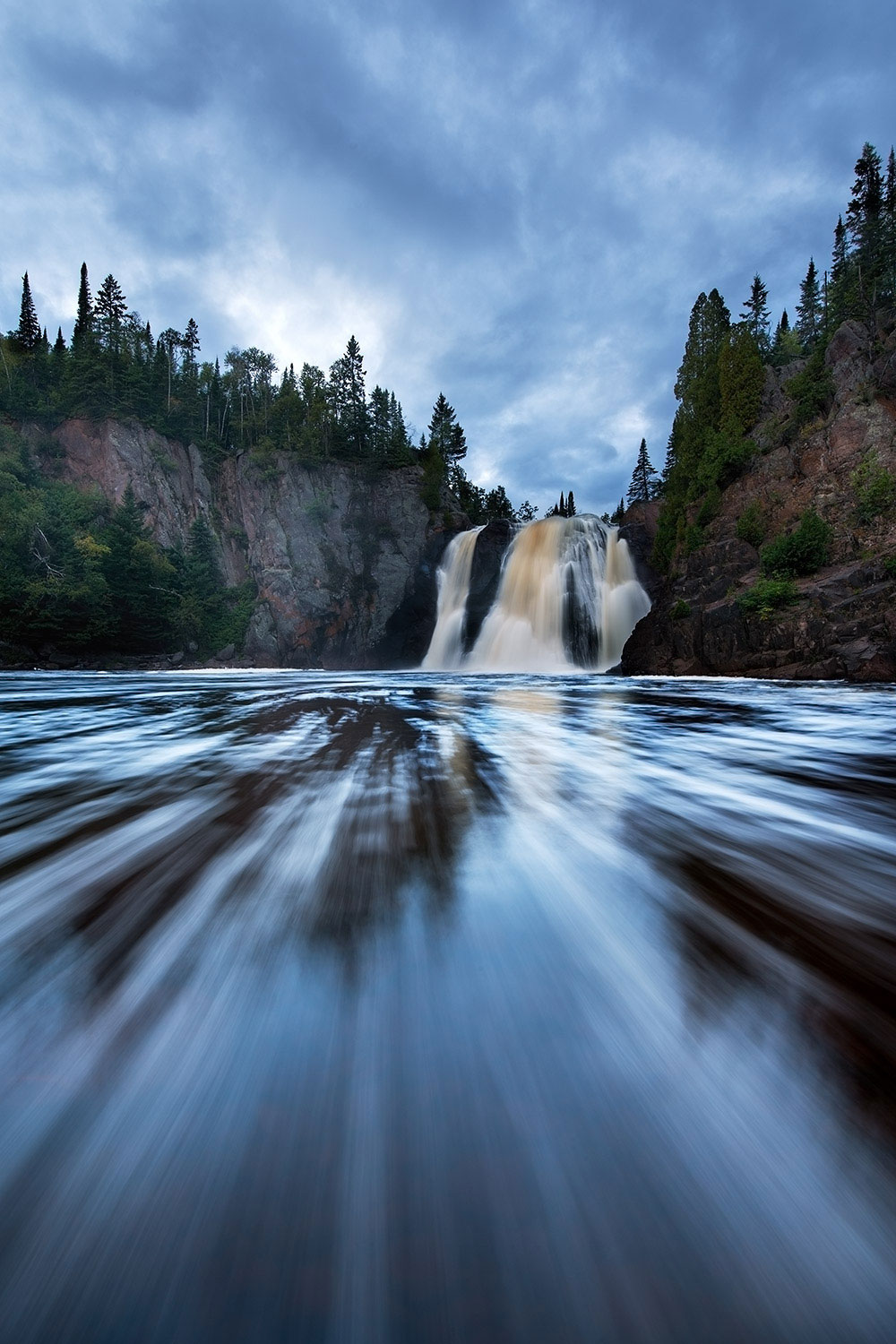 You can create powerful compositions with radiating diagonal lines emerging from the corners and edges of the image frame, inevitably drawing the eye to a central vanishing point: I call this a “visual vortex” composition, which produces a dizzying and compelling perspective, creating a commanding visual effect. If all the lines in the image terminate in the same place, the viewer’s eye is inevitably drawn to that point. When using this technique, look for leading lines radiating from the corners and edges of the image frame, such as the striations in the rock in the slot canyon image below. The sandstone striations were perfect for a visual vortex composition, with diagonal lines coming from all of the image edges and converging in the middle. The eye is drawn to the vanishing point, strongly focusing visual attention there. 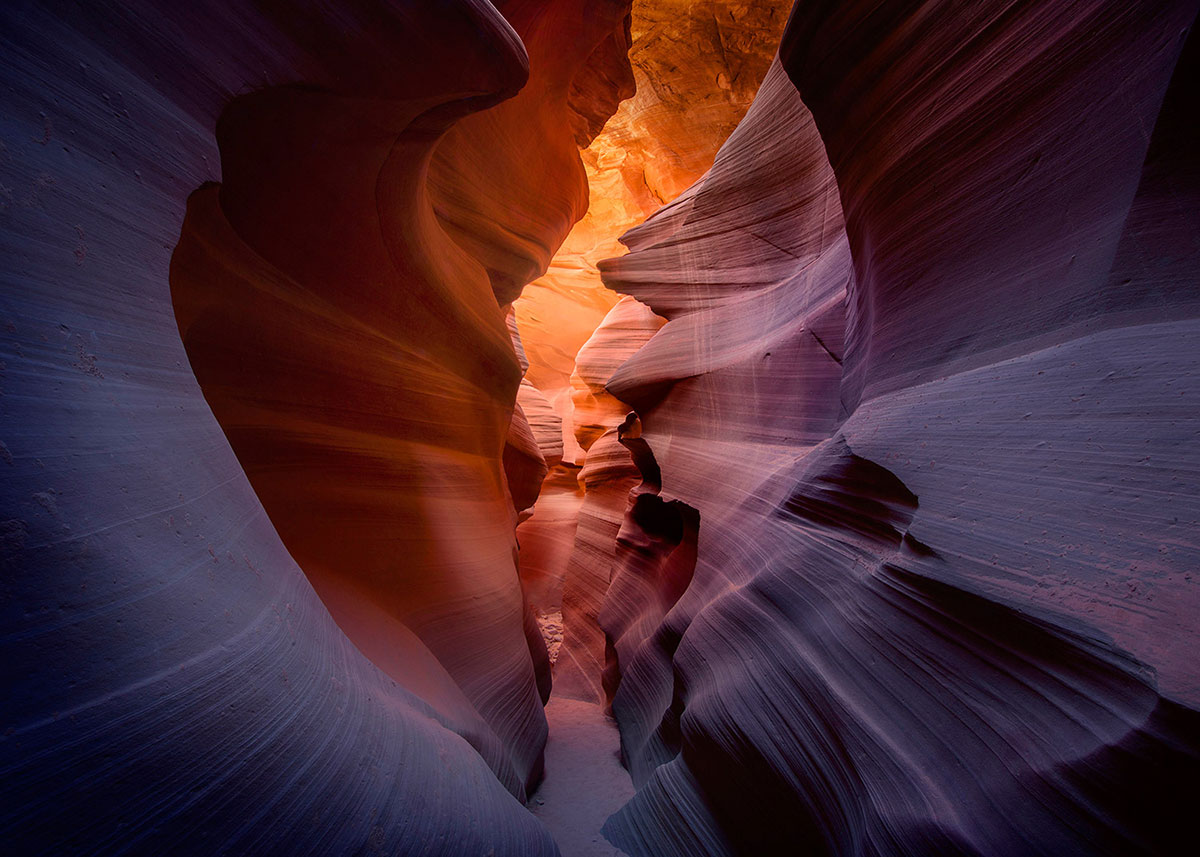 Leading lines are a powerful tool for landscape photographers. Used properly, they can effectively draw the viewer deeper into the composition.