While visiting Indonesia, I spent two nights photographing the sulfur mine of Ijen Volcano. Although the experience was a grueling one for me, it doesn’t even begin to compare to the challenging life led by the miners of Ijen, recognized as one of the most dangerous jobs in the world. Every night, the miners climb to the top of the volcano, descending into its crater to mine sulfur amid a mix of toxic gasses. After the sulfur is extracted, each miner carries almost 200 pounds of sulfur up to the crater rim, and then down to the bottom of the mountain – only to turn around and do it all again. 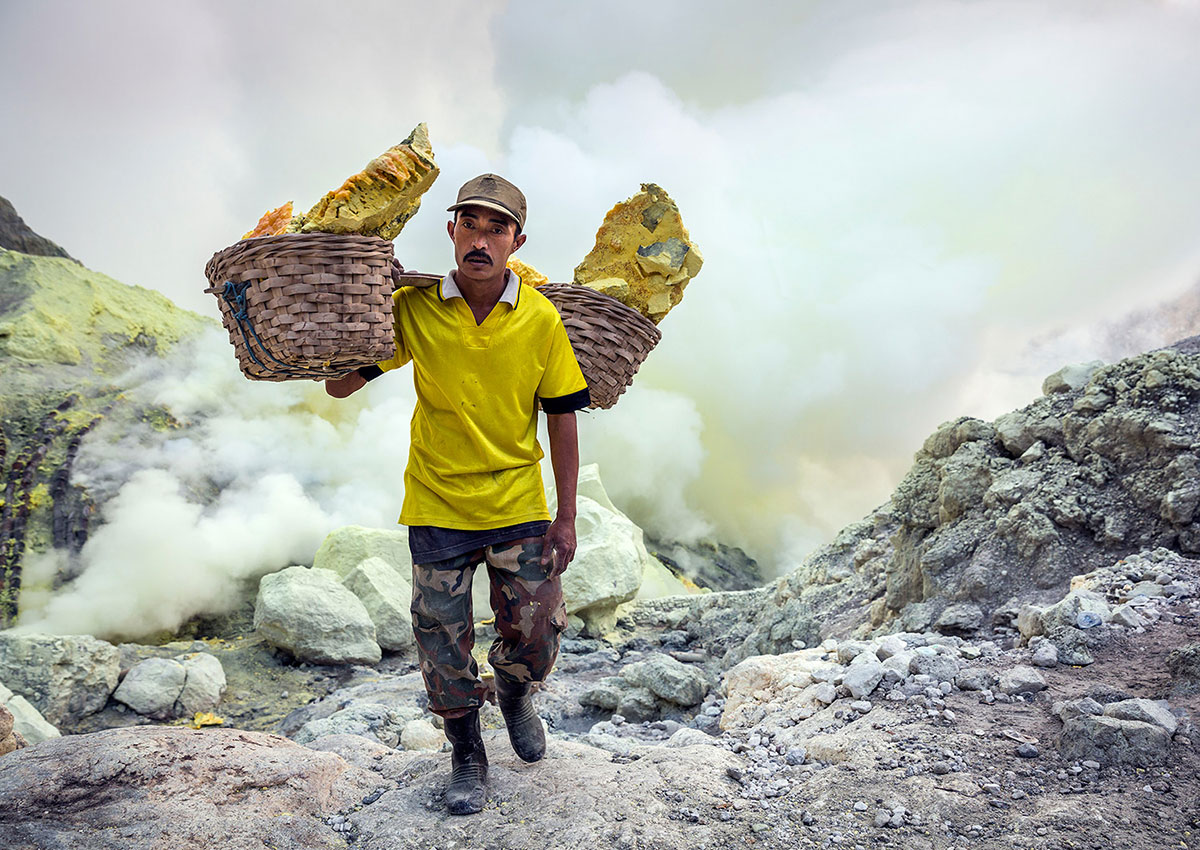 The miners work at night because it gets too hot during the day. So I was up at midnight to drive to the volcano, and then I began the steep hour-long hike to the crater rim. I paused at the rim to take a quick photo of the crater beneath me, illuminated by the light of the full moon. For a brief moment, the clouds perfectly complemented the scene, before they began to dissipate. I increased my ISO to keep my exposure time at a reasonable level. 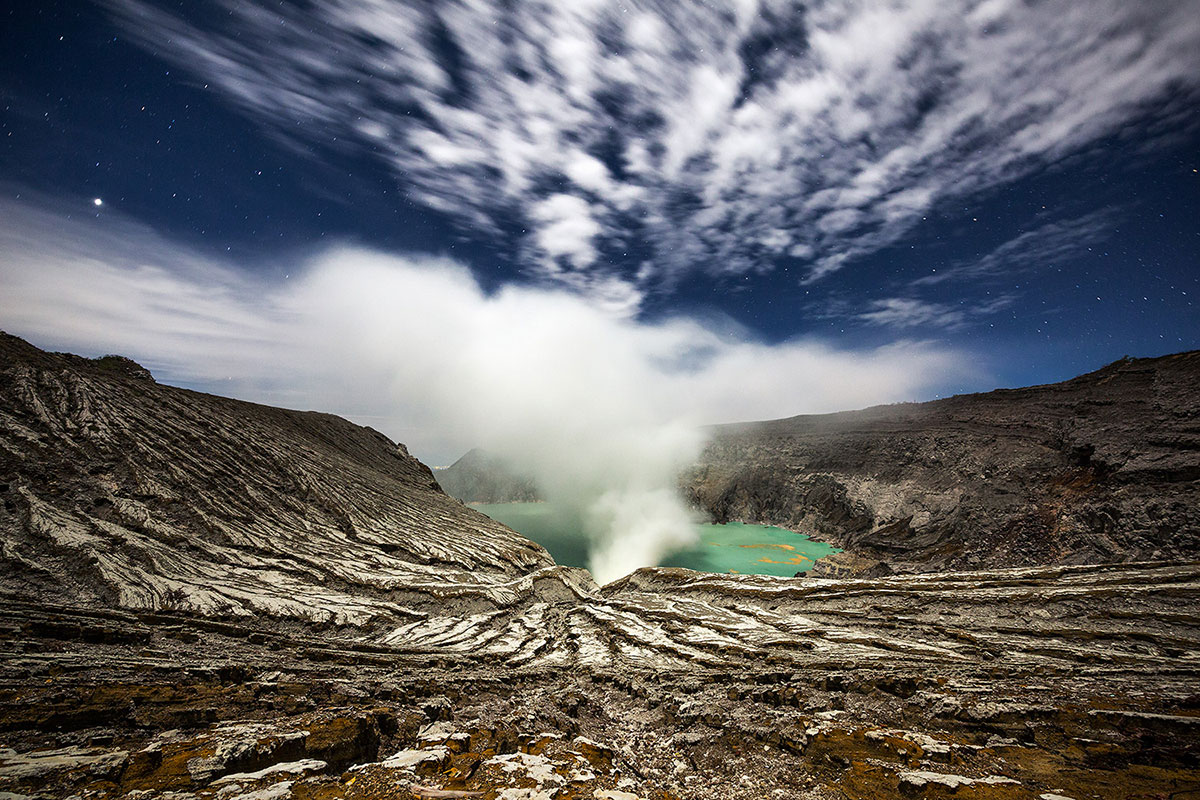 I then descended several hundred feet to the bottom of the crater, where the miners were busy at work. I had to wear a gas mask during the times when I was close to the smoke rising from the crater, or when the wind shifted in my direction. I snapped this quick self-portrait one morning after a night of photography in the crater. 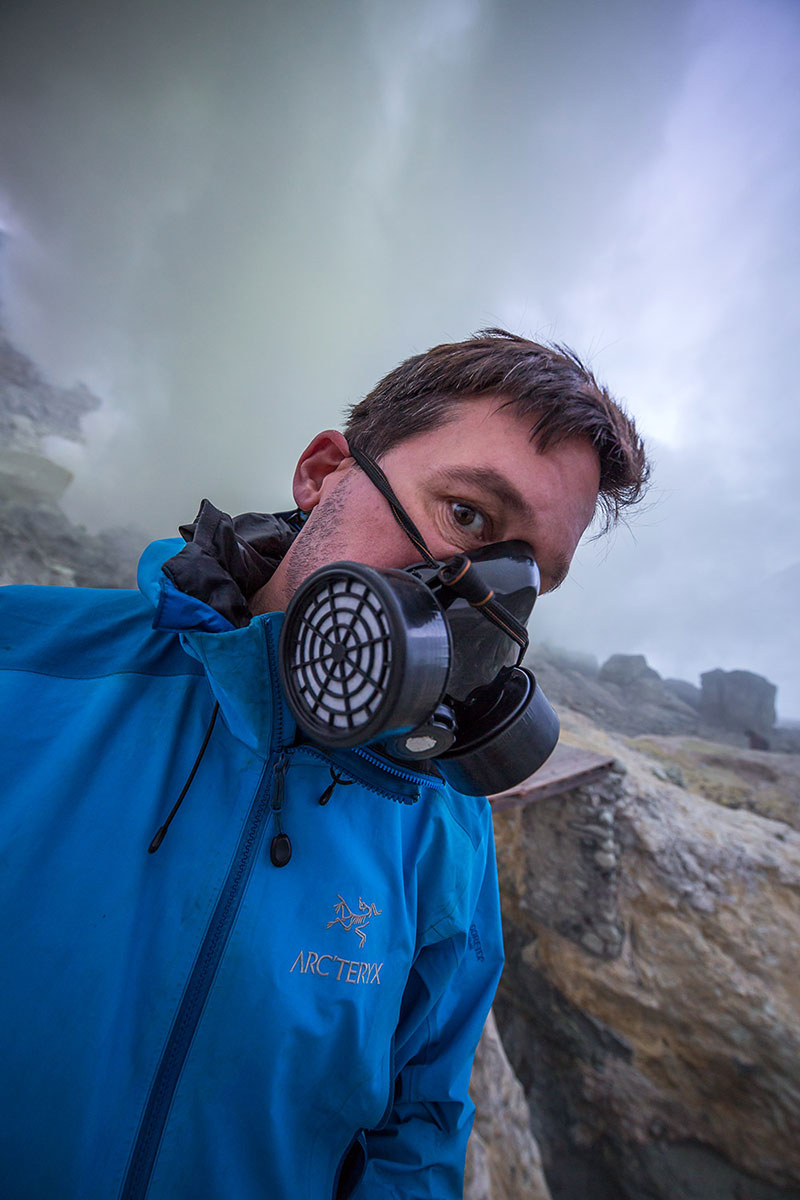 Ijen is famous for its “blue lava,” which is really flames resulting from sulfuric gases emerging from cracks in the volcano and combusting upon contact with the air. Unfortunately for me, the two nights I photographed Ijen, the blue flame was not very visible, as the mountain was emitting a large volume of smoke and steam into the air. I hope to return again when the mountain is clearer and the blue flames more visible, but I was able to make a few photos of the miners at work with blue flame in the background. Because it was so dark, I had to use high ISOs and long exposures, making stopping the action quite difficult (I had to wait for a moment when the miners were relatively still). Next time I visit Ijen, I plan on bringing a fast 24mm f/1.4 prime lens to let in more light. 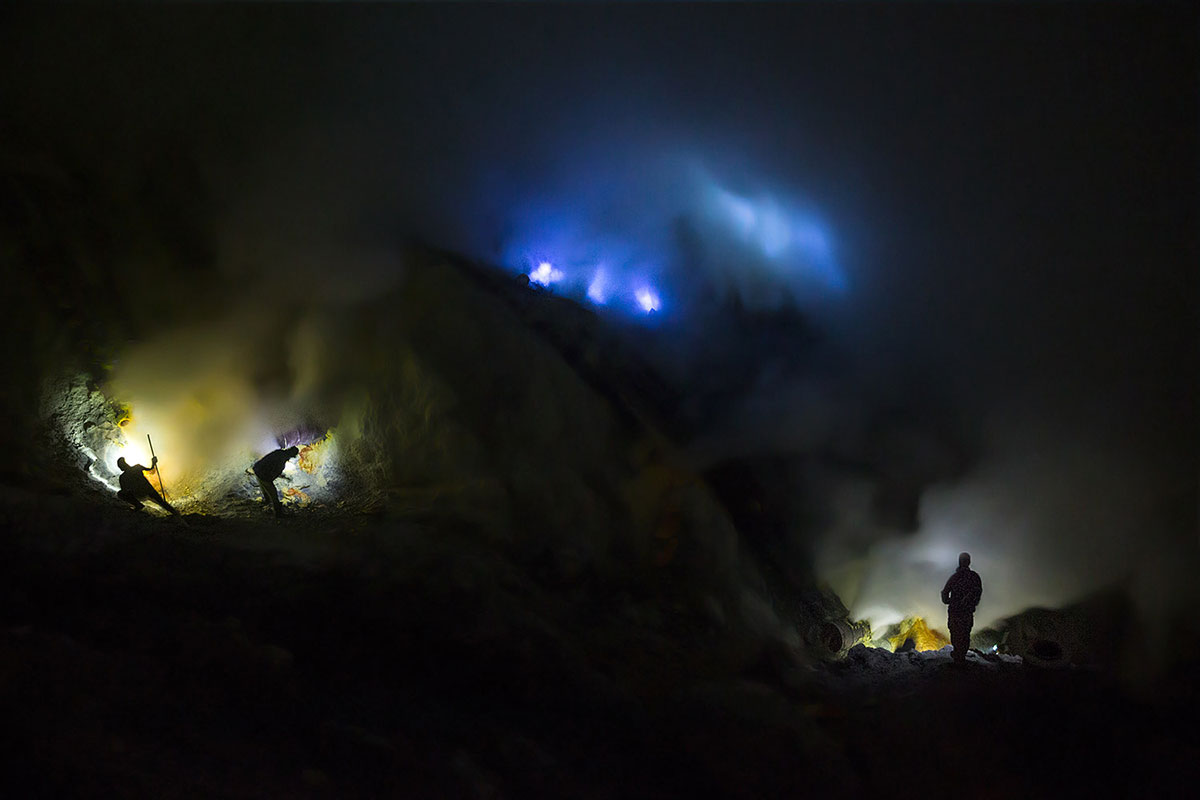 As night passed into early morning, I was able to get better views of the miners at work. I looked for opportunities to show the miners in the context of their dangerous work environment, so I took out my wide-angle lens to take in a broader view. As always, I look for a pleasing arrangement of visual elements in order to create a compelling composition. 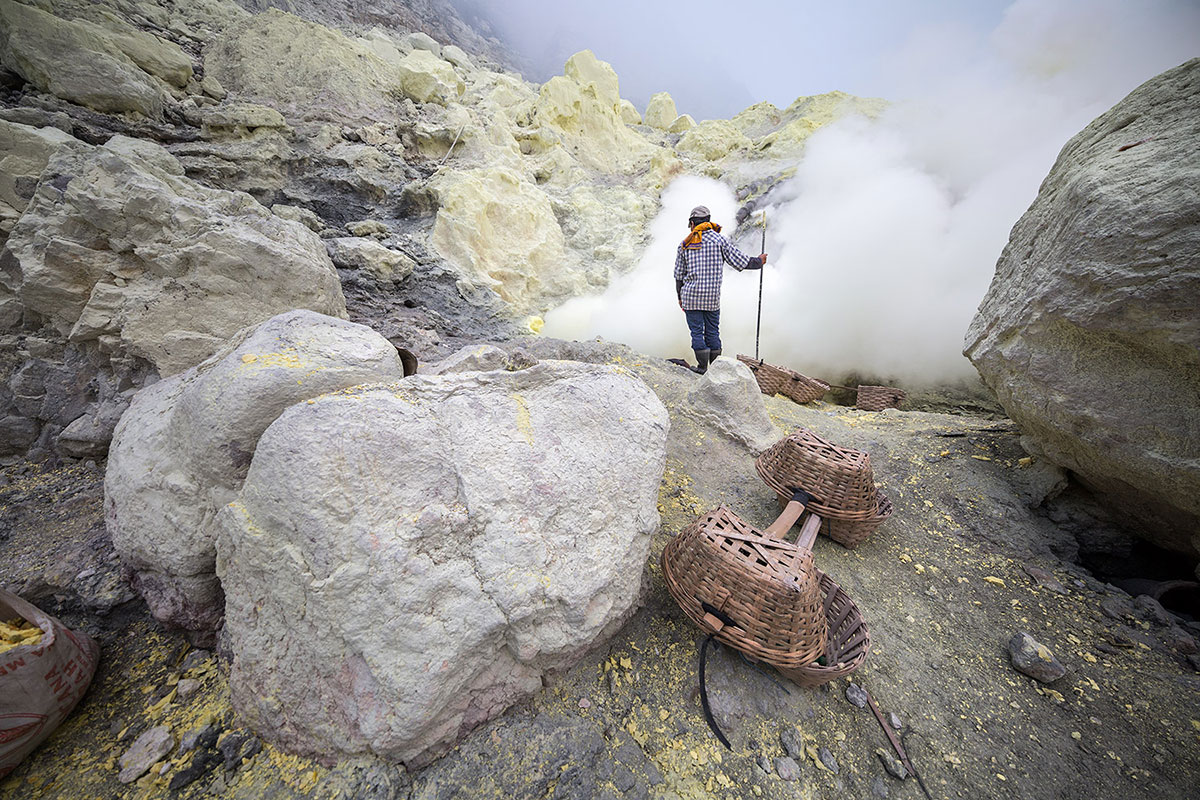 Once a miner collects enough sulfur, he loads up a set of baskets and carries the sulfur on his shoulders up to the crater rim. I tried to lift one of the baskets with a full load, and could barely get myself to stand up straight. The miners will carry up to three loads to the top every day, and then use a hand-cart to carry the sulfur to the bottom of the volcano for processing. 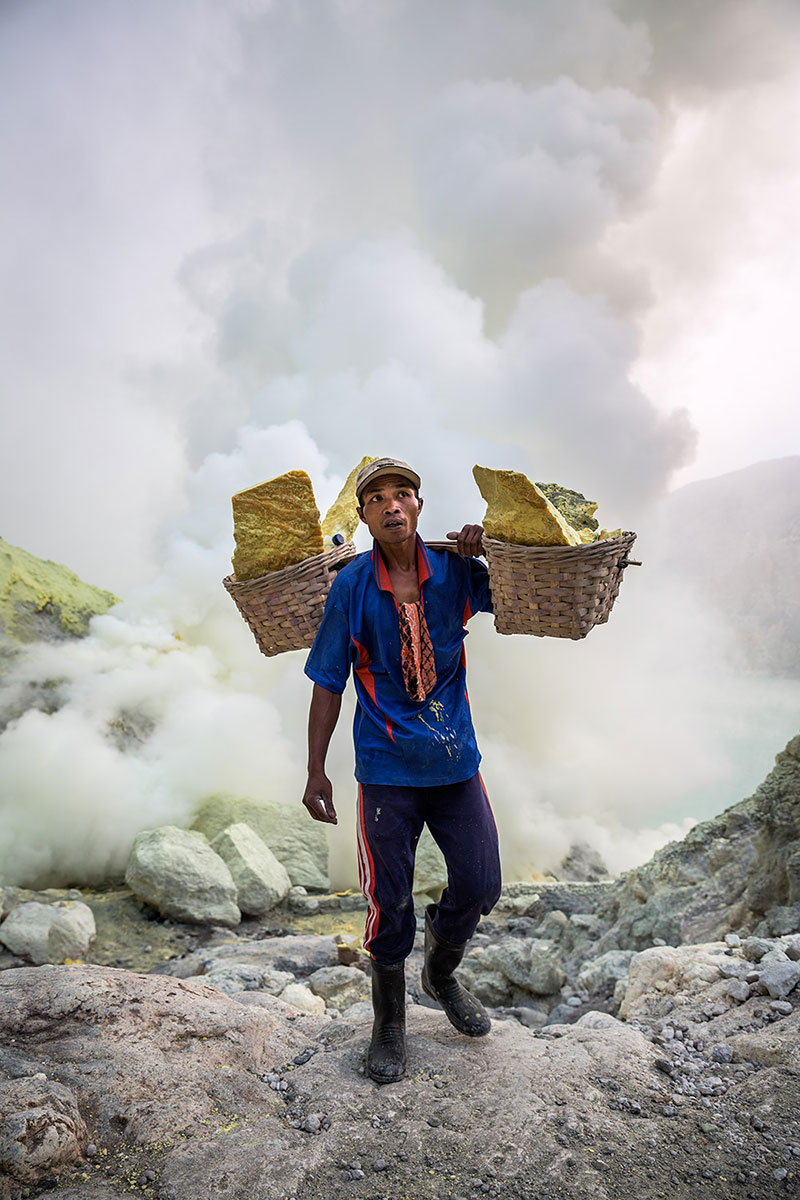 The back-breaking and dangerous work these men perform on a daily basis is beyond the imagination of most of us. It was a privilege to photograph the miners in action, and to share their experiences through my photographs. Ijen is an amazing place, and I hope to return someday.