The leopard is one of the most elusive African predators. When I lead photo tours I always say to my guest that maybe we will not see him – it is nature after all, nothing is guaranteed – but he will see us. He is a master when it comes to hiding in the bush or on the top of trees. And last but not least the leopard – like all the other big cats – is disappearing. To find him you must have really good tracking skills, or have an experienced safari guide. Tracks, spoors, alarm calls from birds or squirrels – everything may help to locate him.

During my career I have photographed many leopards: resting on a tree branch, hiding in a tick bush, running, feeding, snarling, stalking, sleeping. But always during the daytime. The leopard is a solitary animal, mainly with nocturnal habits, so one of my “dream shots” was to take a good shot at night.

There are hundreds of images of leopards at night out there but all of them are illuminated with a frontal flash or a torch light. Not the best approach in my mind as it doesn’t give the sense of place or habitat of this incredible night hunter. Modern digital cameras have incredible high ISO capabilities, and I could go up easily to 16,000 ISO or more and still get a good file. But the result is only a well exposed image, as it was shot during daytime. No, not what I’m looking for. 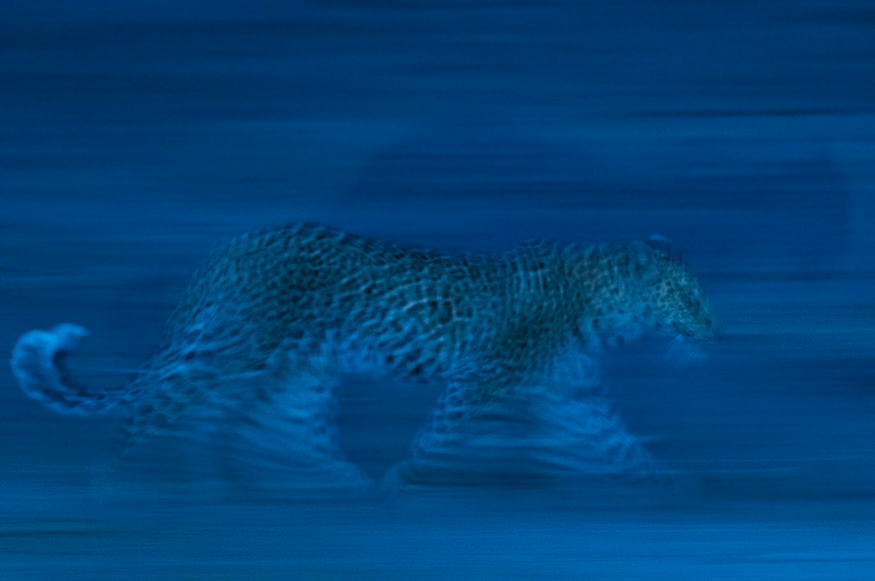 A few years ago, during a trip in Botswana, I spotted a leopard on a tree after sunset, in that period of time known as “the blue hour.” He suddenly jumped down and began to slowly run into a small open area, free from bushes. I had to make a quick choice on how to photograph him. I decided to use relatively low ISO setting, set the white balance on Daylight to get the blue light, underexpose, use a slow shutter speed to get a panning effect, and use a small LED torchlight to pop up a little bit of detail. Of course, that’s easier said than done, but I did the job and I had the time to take three shots, then he disappeared into the darkness.

In this kind of images, the difference between a loser and a great shot is a tiny line. Two of them where looser shots, but the third was good, with the effect and feeling I was searching for a really long time! I was especially proud to have this image run on a double spread page on National Geographic Magazine Italy.

About the author: Award-winning photographer and journalist Sergio Pitamitz has French and Italian double citizenship. He is a National Geographic Creative contract photographer and covers nature, conservation, and wildlife stories. On assignments he has traveled to more than 80 countries in all seven continents, and he has received recognition in many international photography contests such as Nature’s Best, National Wildlife, Oasis, and Audubon. In 2016 he won the National Press Photography Association’s “Best of Photojournalism” award in the Environmental category. His photography is represented by National Geographic Creative and Getty Images. When he is not on assignment, Sergio leads photo tours in the Polar Regions as well as in Africa and other big cat habitats. See more of his work at www.pitamitz.com.