When shooting into the sun it is possible to create an attractive, eye-catching “starburst” effect. The starburst effect results from pointing your lens at a bright source point of light, such as the sun or street lights at night. The effect renders a source point of light not as a bright dot, but rather as “star-shaped” with tines radiating around the light source. For this dizzying view of autumn aspens in the photo below, I made sure to include the sun in the composition, creating an attractive starburst effect. 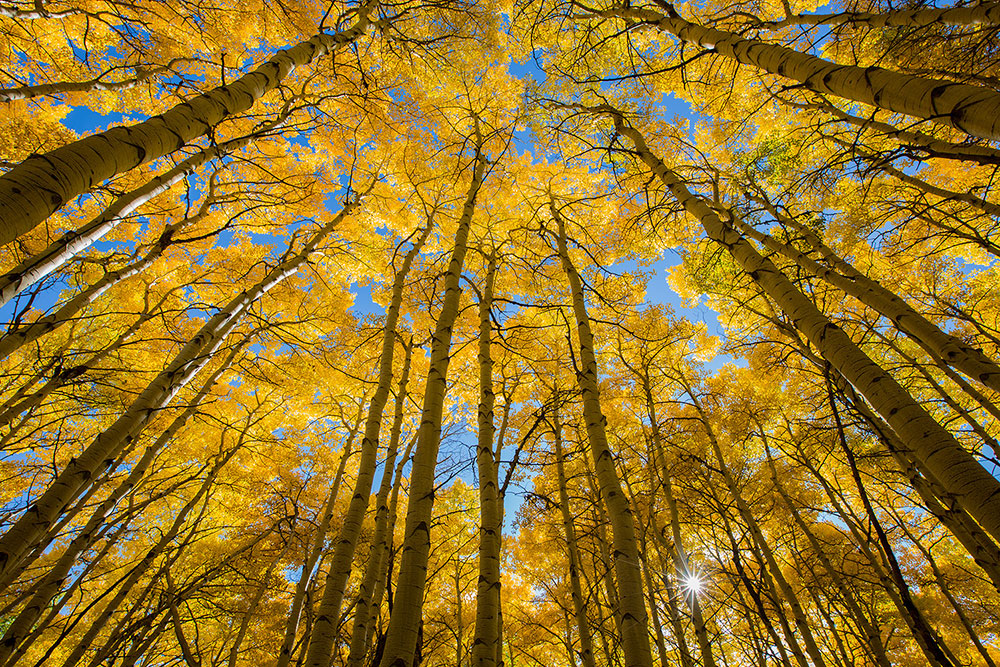 Use a small aperture to create the starburst effect

You won’t get a starburst effect if your aperture is at its widest setting, because at the widest setting the aperture diaphragm is shaped like a circle. An optical phenomenon called diffraction causes the starburst effect; as light passes through a small aperture, it is diffracted (or spread out) across the lens’ aperture blades. As you stop down your lens and select smaller aperture, the blades of the diaphragm come together to form a polygon shape, which is what creates the star-shaped streaks radiating from the light source. The smaller the aperture you use, the more pronounced the effect.

Typically, a small aperture such as f/11, f/16, or f/22 is necessary to produce an attractive burst; the smaller the aperture the better the effect, although you may want to avoid extreme apertures such as f/16 or f/22 because of diffraction (this same optical effect that produces the starburst effect also reduces overall image sharpness at small apertures). So, when choosing your aperture, you are trying to find the right balance between a crisp and bold starburst effect, and minimizing the sharpness-reducing effects of diffraction.

When working with high-quality lenses, I find that f/11 usually gives me a starburst of adequate quality while at the same time maximizing overall image sharpness, although sometimes I’ll stop down a little bit more to enhance the starburst. For the image below, I was lucky enough to capture the sun rising and the crescent moon setting; an ultra-wide lens allowed me to include both within the image frame, and stopping down to f/11 created a crisp starburst. 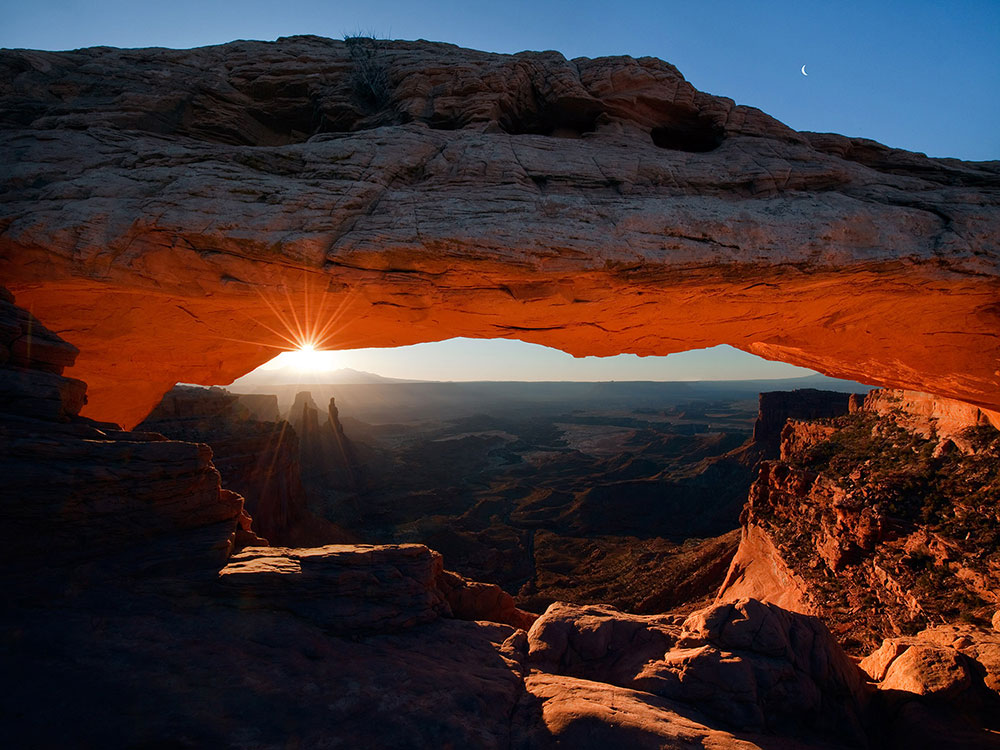 Flare can be a significant challenge when the sun is included within the picture frame, as you cannot effectively shade the lens to prevent light from hitting the glass. In such circumstances, it is typically possible to partially block the sun to reduce its intensity (for example, by using a tree trunk or a passing cloud). It is important to find the right balance between blocking the sun sufficiently to reduce flare, and leaving enough of it exposed to create a strong burst. For the image below, the sun was shining through a small hole in the sandstone formation, which blocked the sun just enough to eliminate lens flare, but still allowed a strong sunburst effect. 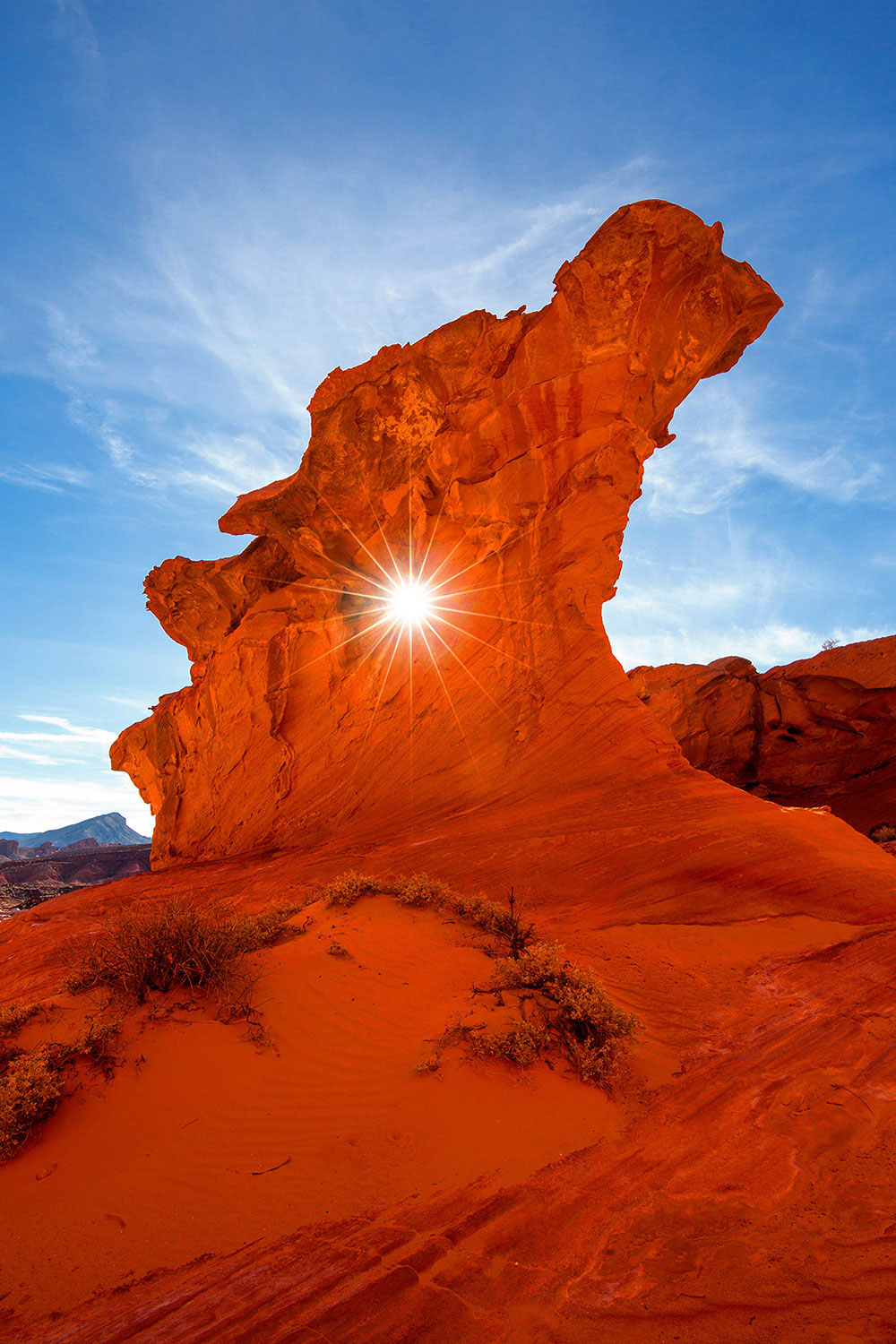 If you can’t block the sun, try shooting with the sun low on the horizon

Sometimes partially blocking the sun isn’t an option, and sometimes you might prefer to capture the sun in the sky without any obstruction. You should expect to get some lens flare in such circumstances, especially right around the sun. When the sun is low on the horizon, its intensity can be reduced by haze and atmospheric particles, which should help mitigate flare somewhat. Too much haze, however, can reduce or eliminate the starburst effect. For example, with the image below, you’ll notice some flare around the sun. 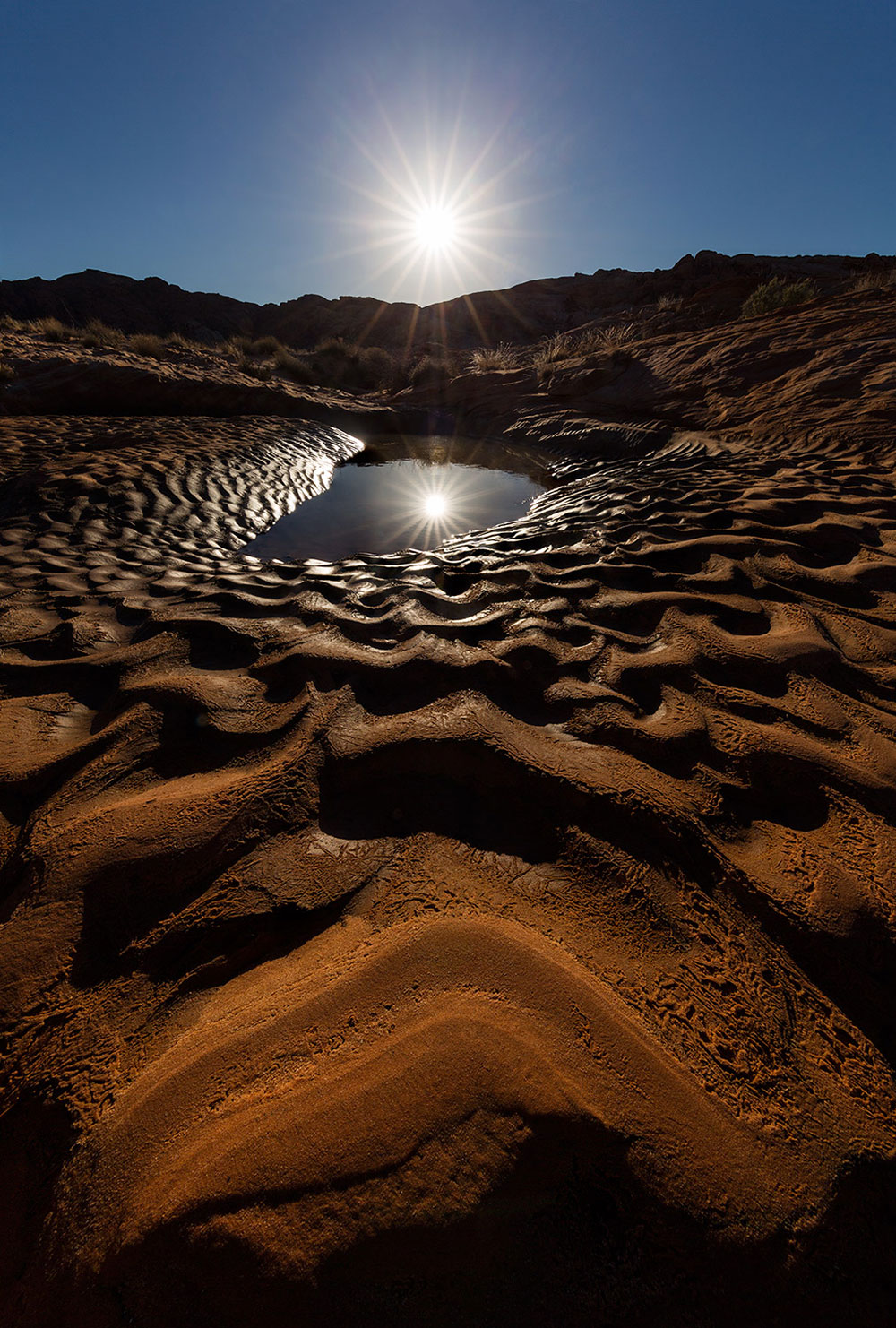 Not all lens handle shooting into the sun equally

Also, generally speaking, higher quality “pro” lenses will produce more defined and higher quality starbursts than lower-quality consumer lenses. Even among pro lenses, there is considerable variation as to the quality and character of the starburst effect created. Of course, there is a huge subjective component to how one feels about a given lens’ starburst quality, so I suggest looking at sample images when considering a lens purchase.

The quality and characteristics of the starburst produced by a lens are a result of the number and shape of aperture blades. For technical reasons too complicated to go into here, lenses with an even number of blades produce stars with spikes equal to the number of blades (for example, a lens with 8 aperture blades produces a star with 8 spikes). Lenses with an odd number of aperture blades, however, produce two spikes for each blade (for example, a lens with 7 blades produces a star with 14 spikes). Furthermore, some lenses have a tendency to produce “twinning” or “splitting” of their spikes, most noticeable at the far ends of the spike.

Which type of starburst effect you prefer is, of course, entirely subjective and completely up to you. Although many photographers prefer fewer spikes, I’m partial to the 18-spike stars produced by 9-blade lenses such as the Nikon 14-24mm, Canon 11-24mm, or Tamron 15-30mm. What can I say, I like a lot of spikes! That’s just a personal preference, of course. 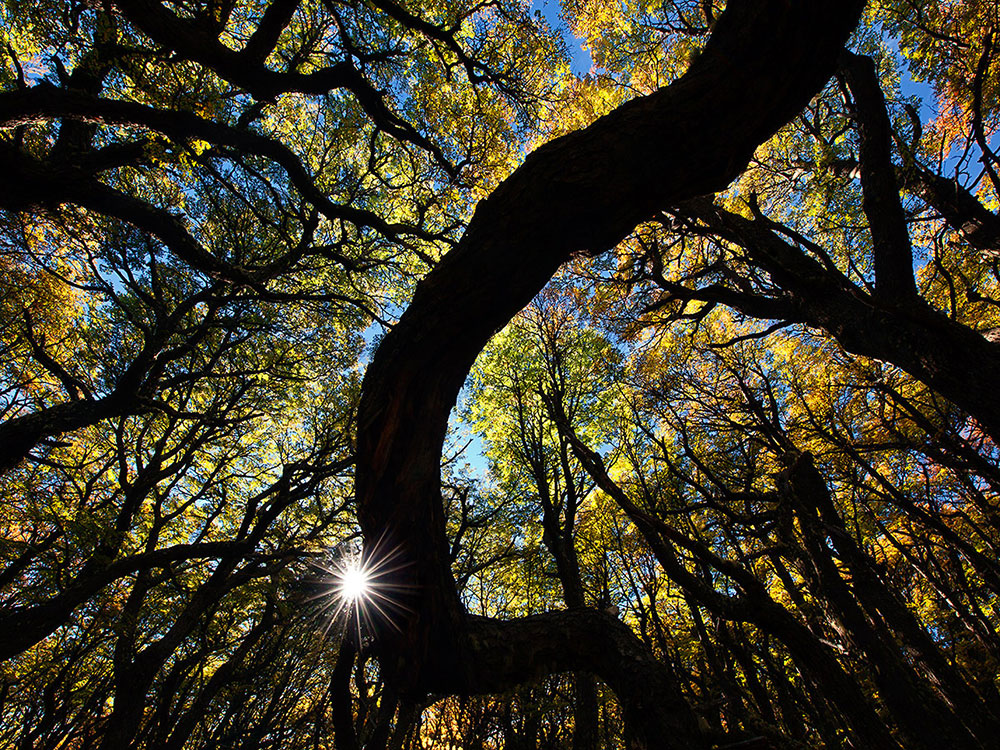 Smudges, dirt, or oil on the front of your lens can increase lens flare. So can UV or other types of filters. If you are having problems with flare when shooting into the sun, make sure to remove any filters and check to make sure your lens is clean. 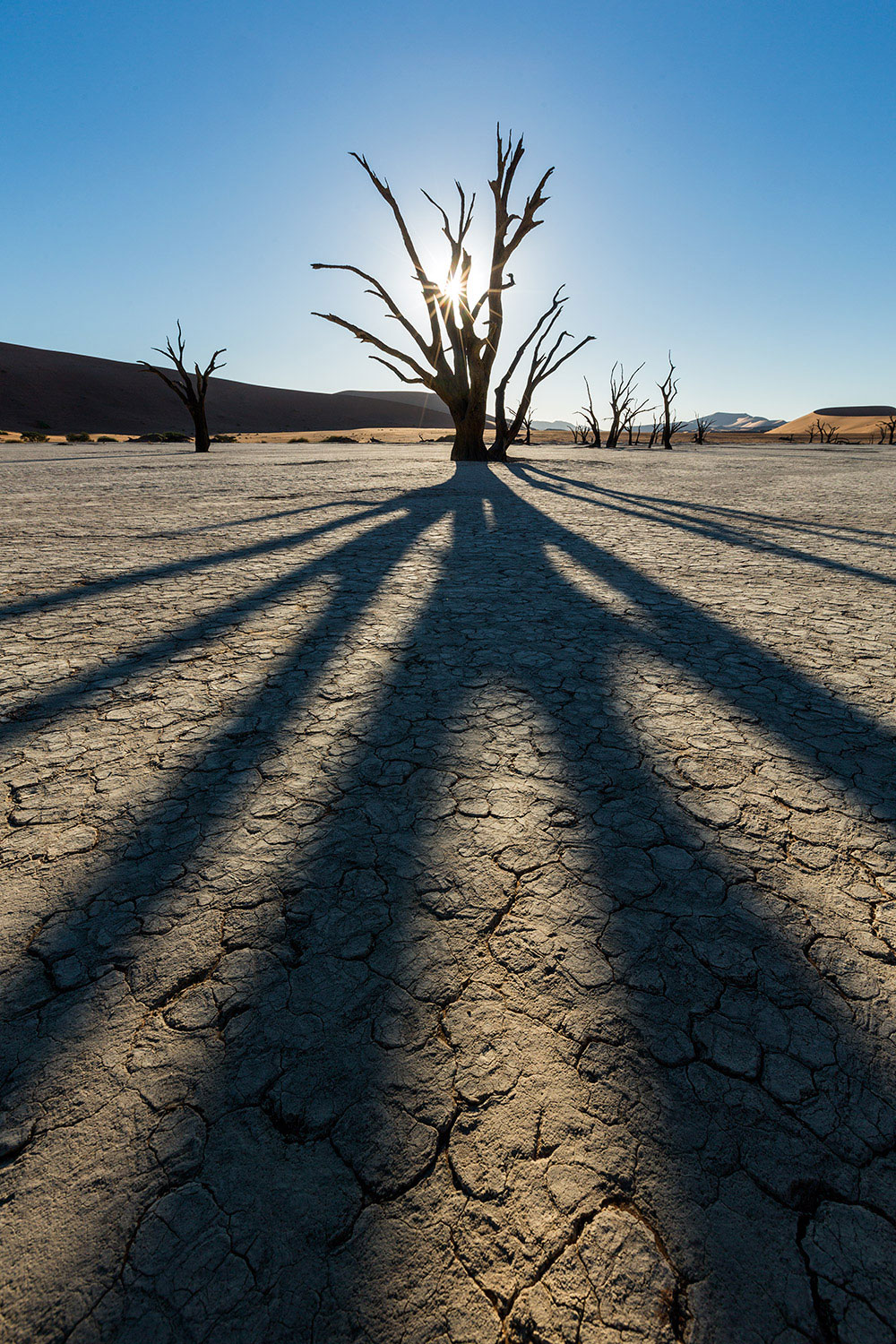 The starburst effect isn’t limited to landscape photography and shooting into the sun. Anytime you have a bright source point of light, you can create a starburst effect. The moon during a night shoot can be great for starbursts. And when shooting cityscapes at night, I’m always on the lookout for ways to include bright street lights for creative use of the starburst effect, such as with this photo of the Lowry Avenue Bridge in Minneapolis, Minnesota. 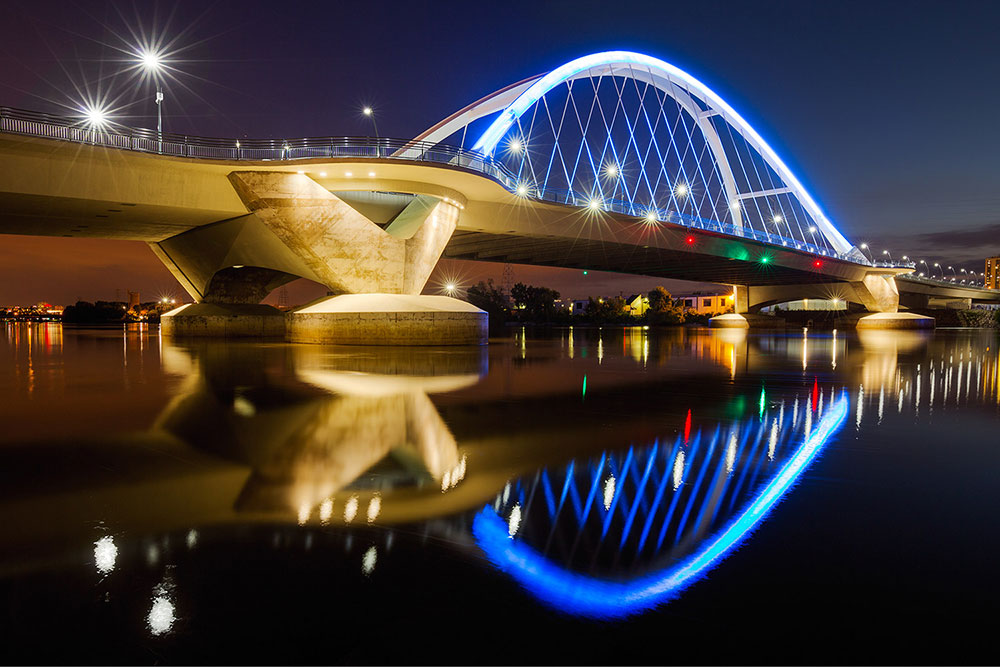 Including the sun as a starburst creates an eye-catching point of interest in your compositions. With a bit of creative positioning, technical considerations are easily overcome.

About the author: World-renowned professional photographer and Tamron Image Master Ian Plant is a frequent contributor to a number of leading photo magazines (including Outdoor Photographer, Popular Photography, and others). You can see more of Ian’s work at www.ianplant.com.

20 Responses to “How to Create a Starburst Effect”