One of the hottest and driest places on Earth, the Danakil Depression in the northern part of the Afar region in Ethiopia (part of the great East African Rift Valley) is one of the most cruelly inhospitable places on the planet. Much of it lies below sea level, with temperatures as high as 125 degrees Fahrenheit and an average yearly rainfall of less than eight inches. The Danakil offers photographers a chance to explore vast salt pans, colorful geothermal features, active volcanoes, and the nomadic Afar people who call it their home, prying slabs of salt from the pan and loading it on camel caravans that traverse the desert. If you’re willing to suffer the heat, that is! 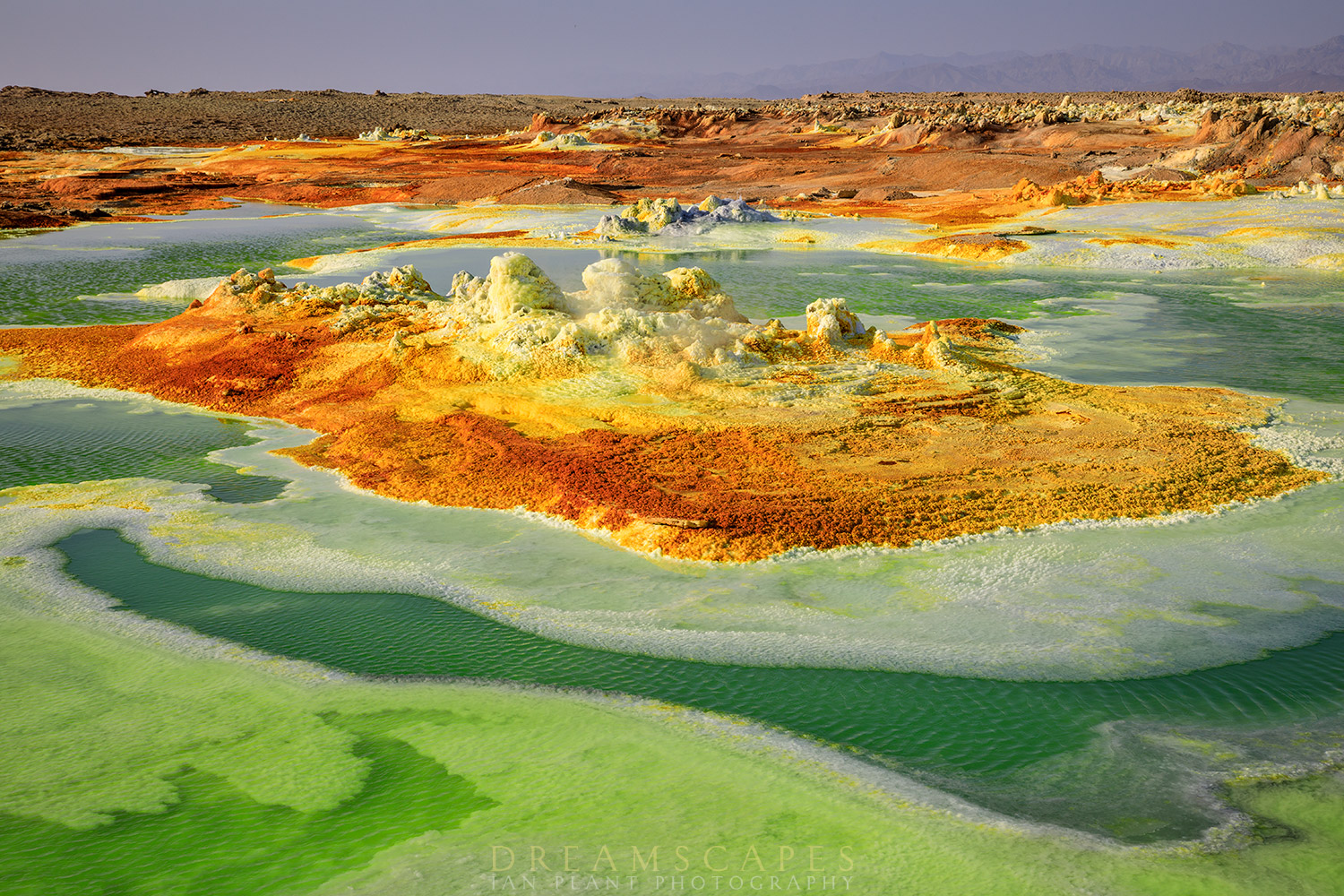 Although the Awash River enters the Danakil, it does not leave to ever reach the sea—all of the water eventually dries up in a chain of salt lakes, leaving behind vast salt pans. At sunrise and sunset, the patterns in the salt make excellent leading lines for landscape photos, although it might take some time to find a set of patterns that work well as a foreground. When I was there, I was lucky to find the pan partially flooded, which added reflections to my photos. 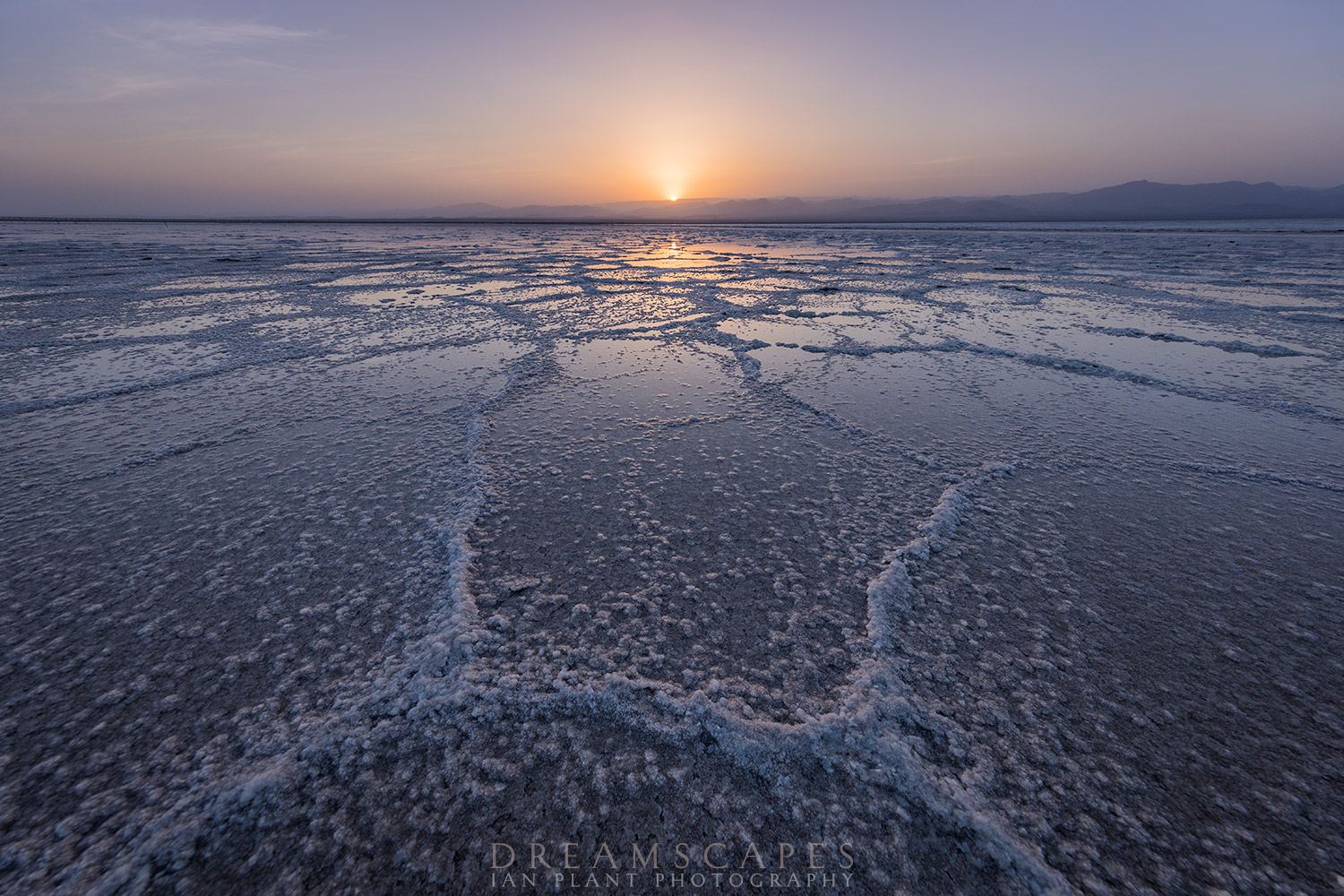 The nomadic Afar people who live in the Danakil cut the salt by hand from the pans, packing it on camel and donkey caravans that traverse the desert, taking the salt to the markets in Mekele (about a week’s walk). Usually, the caravans pass near the Hamed Ela village at sunset; the tour companies head to the best spots in the late afternoon to provide their clients with good views of the wandering caravans. 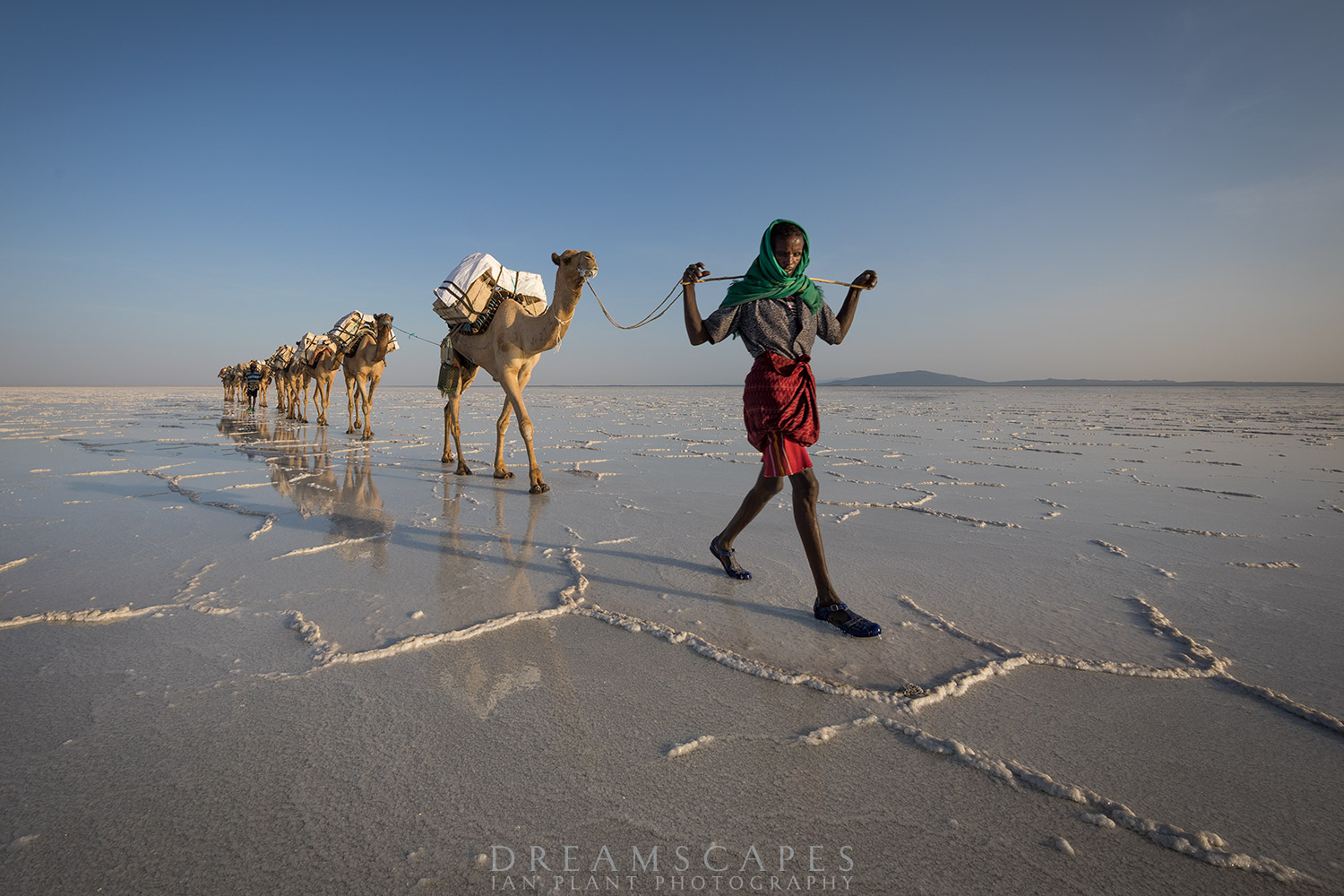 One of the primary attractions in the Danakil are the Dallol sulfur springs. These geothermal hot springs contain a rainbow of shockingly vibrant colors. Unfortunately, at least during my visit, I found it impossible to arrange to be on location at sunrise or sunset. I was able to be there in the early morning shortly after sunrise, but even by then the light was getting increasingly harsh. Nonetheless, the amazing colors of this place made up for the lack of magic hour lighting. 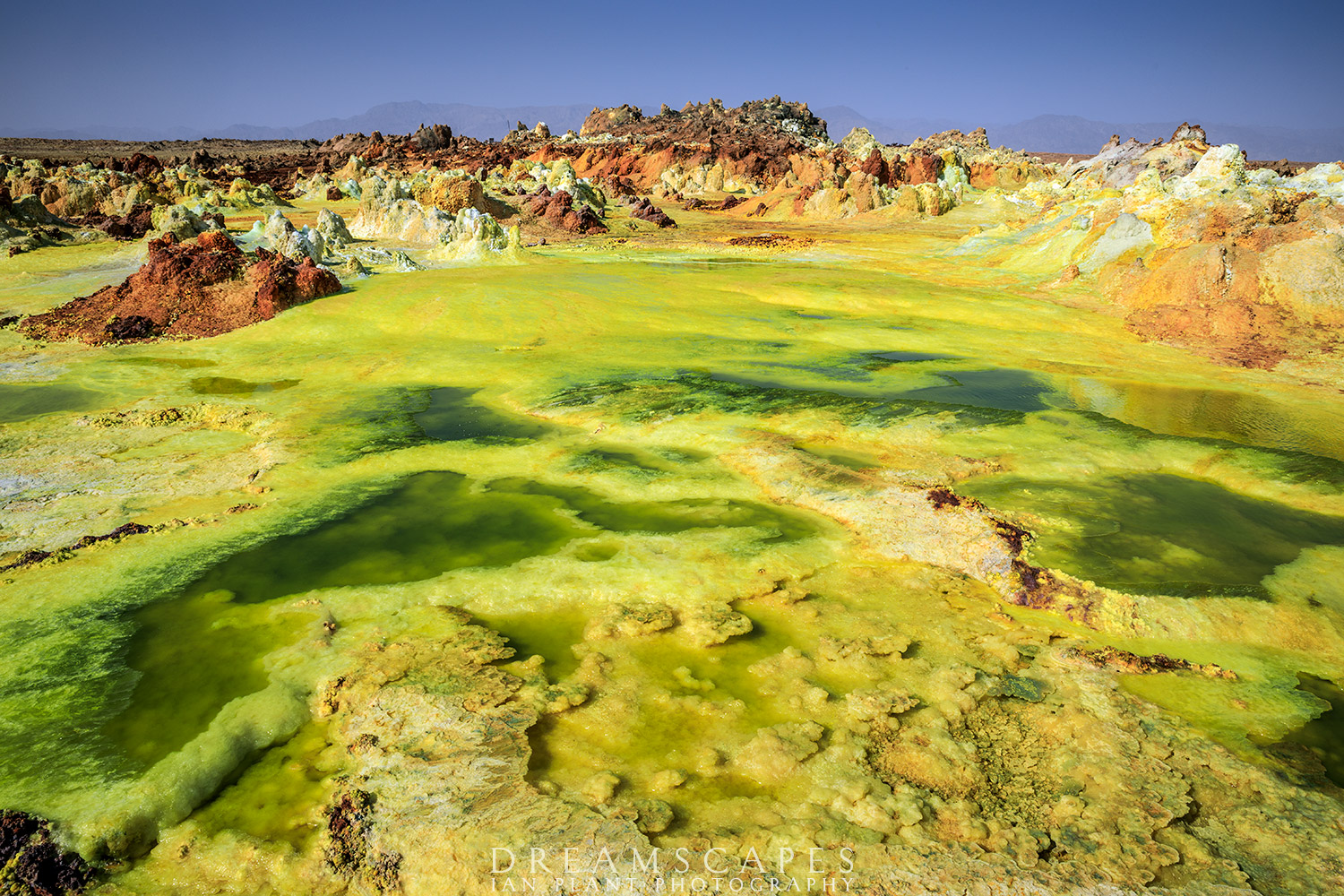 I spent several hours wandering the alien landscape of Dallol, exploring its many hues and miniature geysers with my camera. Dallol has an endless array of interesting formations; expect to find interesting compositions ranging from short telephoto intimates to ultra-wide views. 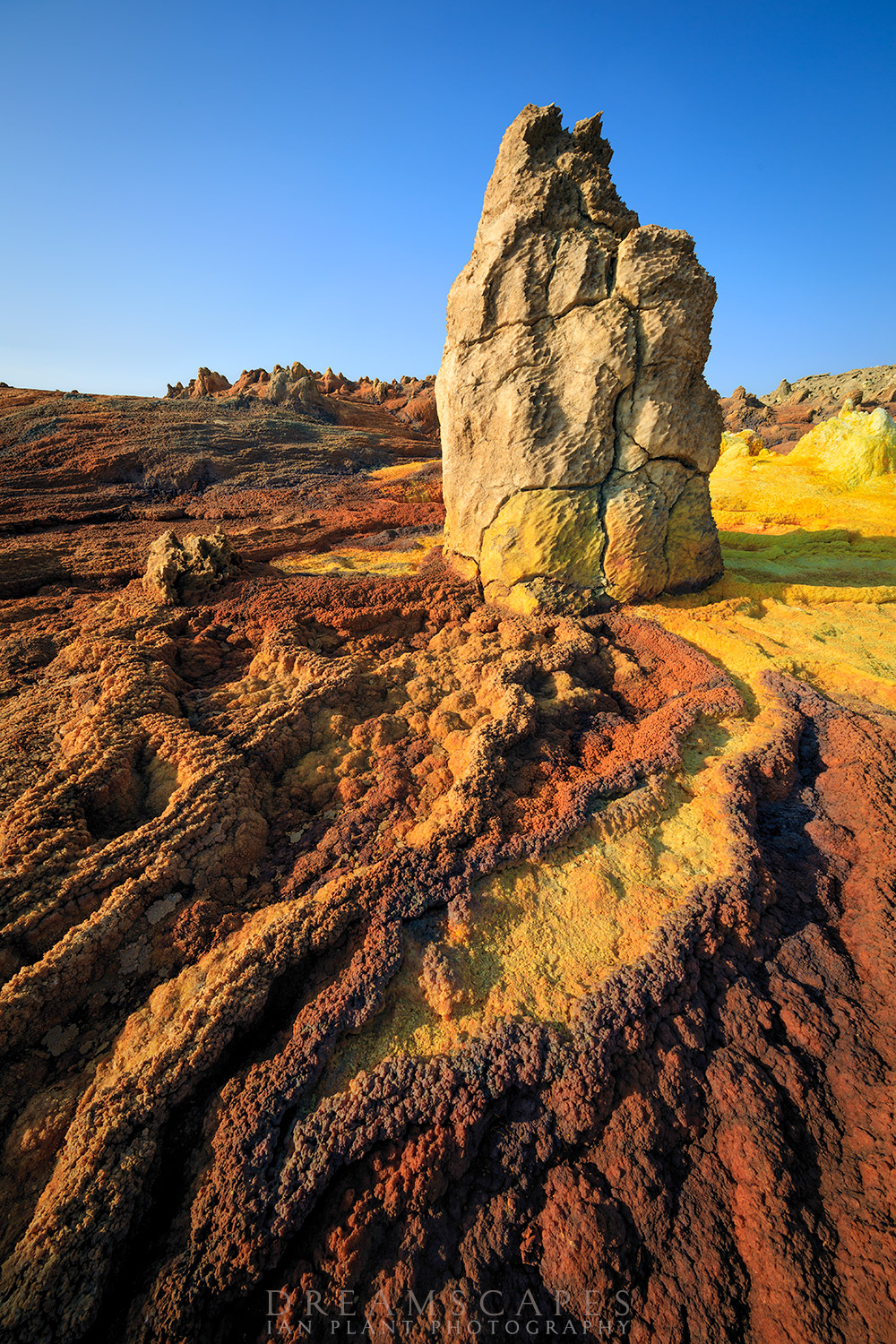 The centerpiece of the Danakil, and its main attraction, is the active Erta Ale volcano, one of only a handful of persistent lava lakes worldwide. The volcano can be reached after a rough four-wheel drive and then a six-mile hike (usually done after sunset to avoid the heat). The lava lake is best photographed at night and twilight, when the lava is most visible. Plan for an overnight stay at the campsite on the crater rim; tell your guide you want to stay for sunrise, and then hike down to avoid the heat of the day. 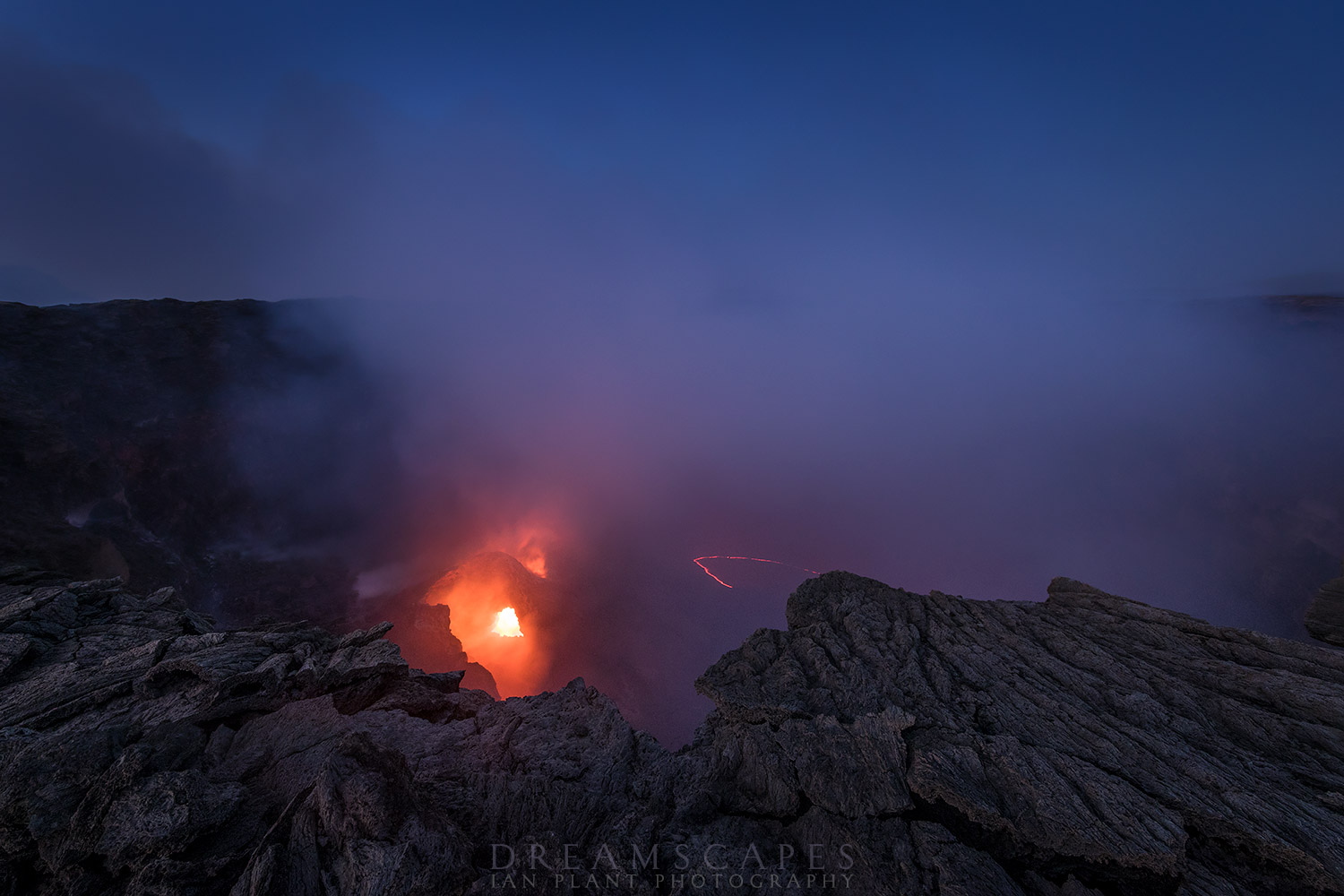 Unfortunately, as of this writing, Erta Ale isn’t quite what it used to be. Following a period of exceptional activity in early 2017, the level of the lava has dropped considerably, making it difficult to see and effectively photograph the lava lake. An interesting feature, however, called by the local guides “The Gates of Hell,” is currently visible. Hopefully, the lava lake will rise again soon! 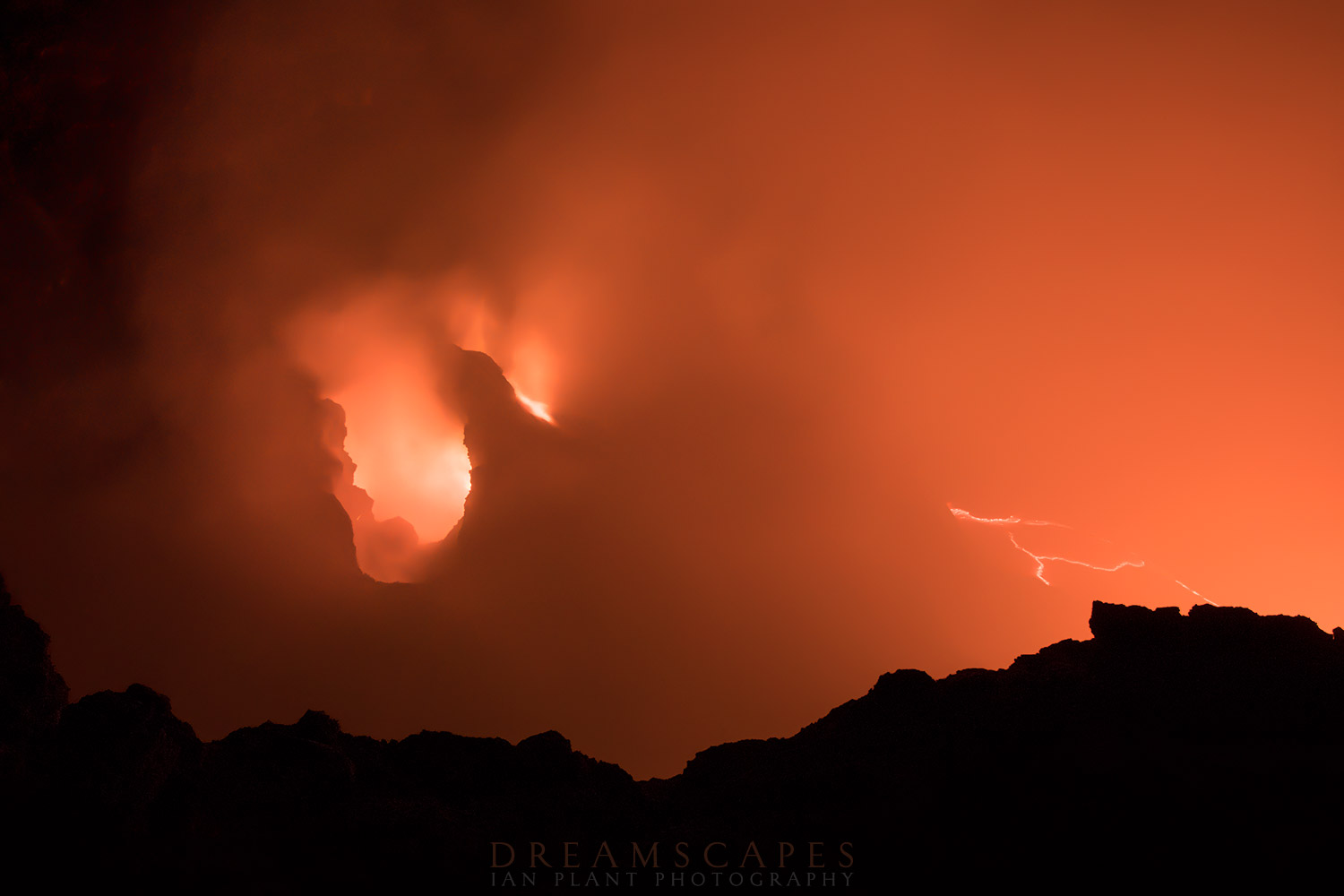 The best way to see the Danakil is to work with a travel company, which can arrange for transportation, a guide, and armed guards (in 2012, tourists were attacked by Eritrean rebels, so now you cannot enter the Danakil without—literally—a small army of armed guards with you). Also, there is no lodging within the Danakil, so you’ll have to camp while you are there; a travel company can organize “glamping” (glamorous camping), which will help make things a bit more comfortable (although expect toilet facilities to be limited, if not non-existent). For my travels in Ethiopia, I used Simien Mountains Trekking and Tours, including for my visit to the Danakil. The closest place of relative comfort is the city of Mekele, which is several hours away. Although you will drive down from Mekele through Ethiopia’s highlands on decent asphalt roads, once you are in the Danakil, most of the driving will be on bumpy four-wheel drive tracks. 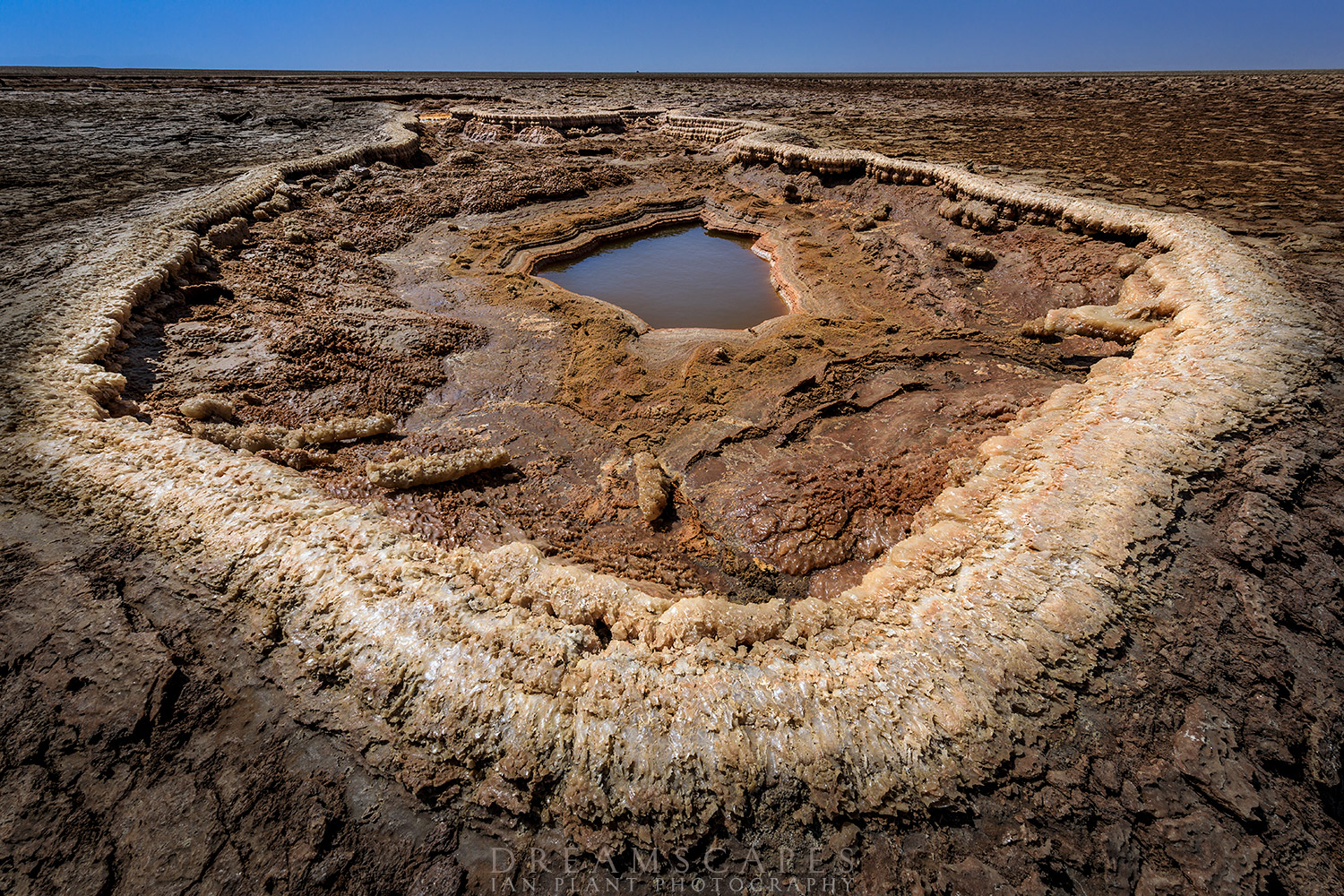 The Danakil is a rough, uncomfortable place to visit, and the photo opportunities don’t come easily. There is huge potential in the area, however, especially if security and access restrictions relax in the future. Also, keep a close eye on activity at Erta Ale; if the crater refills or gets more active, it will once again be one of the best places in the world to photograph lava. Visit Volcano Discovery to stay up to date with the latest information about the volcano’s activity.

If you want to learn more about photographing volcanoes, check out this money-saving bundle which includes my instructional video “Vanuatu: Into the Heart of Yasur Volcano” and ebook “How to Photograph Lava”: