Sign in to view full video or become a member now!
Duration: 9:20

Photographing coyotes can be challenging, as they can be easily spooked, but in this Yellowstone winter photography course, wildlife photographers Doug Gardner and Jared Lloyd come across a lone coyote making its way along a riverbank and, finally, settling down to intently watch some small prey in the snow. The coyote’s stillness makes for great winter wildlife photos.

One of the perks of shooting wildlife photography in the winter is that you never know what you’re going to come across, and when you do come across it, you’ll have a nice white backdrop to help you spot the animal. In this session, photographers Doug Gardner and Jared Lloyd take you on an expedition photographing coyotes, and they encounter one along a river in Yellowstone National Park. They follow the animal for 600 yards before it settles down on the riverbank, watching as it hunts down small prey in the snow. The coyote is aware of the photographers, but it has more important considerations: It’s time for a snack, and there’s something to eat.

Doug and Jared demonstrate techniques for shooting during winter weather conditions, including digging themselves into the snow and using their bodies as makeshift tripods. After taking some shots, Doug takes a gamble and moves for a better angle but misses the coyote pouncing on its prey. As the wind picks up though, the coyote visibly reacts to the blowing snow and cold. Now, instead of displaying a calm, almost tender expression, the animal narrows its eyes, bracing itself against the cold wind, which illustrates the harshness of winter in Yellowstone.

In this session, you’ll also get tips for photographing coyotes, including how to shoot neutral colors like the coyote’s fur against the bright snow and how to overexpose the shots to compensate for the camera’s attempt to turn the snow into neutral colors by adding gray.

MORE IN THIS COURSE:

Purchase video and add to your personal library with on-demand video access. 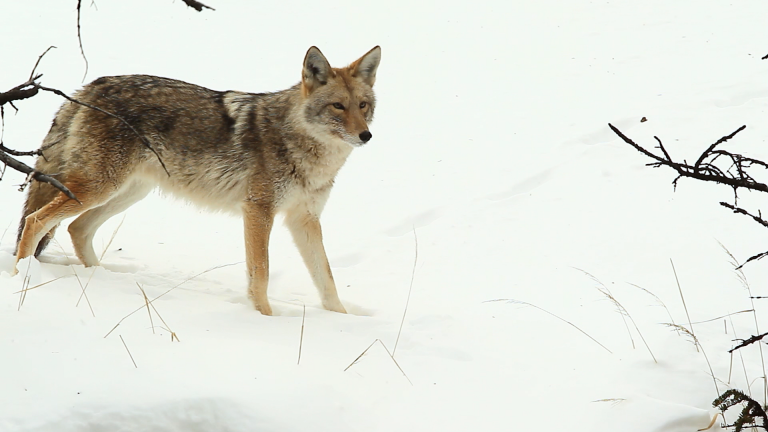 $6.98
Add to Cart
Photographing CoyotesJoin Outdoor Photography Guide to continue watching for $8.00 per month / $82.00 per year or purchase this video for $6.98.